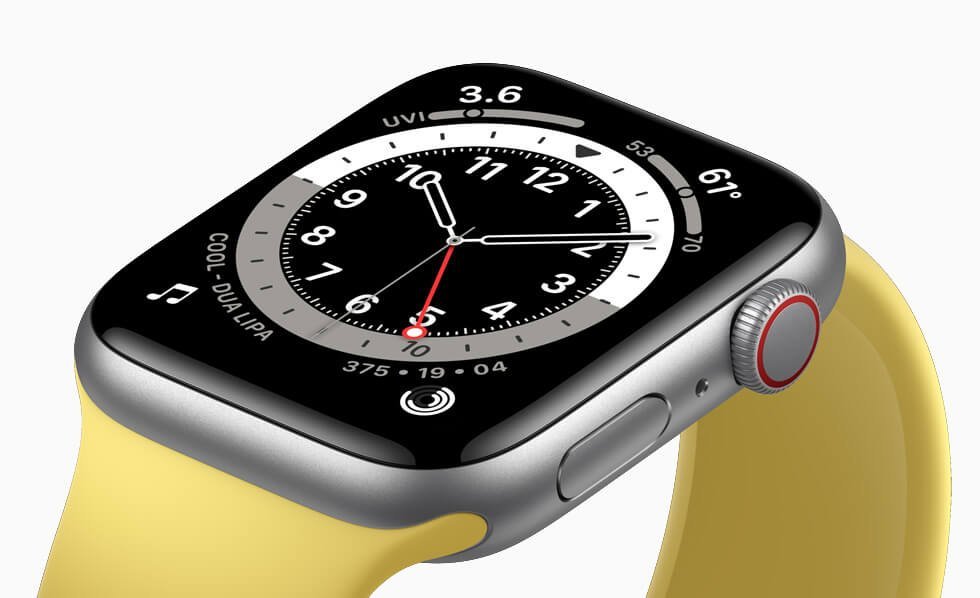 The Apple Watch SE comes with a 1.78-inch OLED touchscreen display and the screen resolution used here is 448 x 368, along with 1000 nits of brightness and 326ppi density. The Apple Watch SE weighs about 36.4g and is 10.4mm thick. The wearable is water-resistant up to 50m deep, and the display is strengthened with Ion-X glass. Apple claims that the display of the Apple Watch SE is 30% larger than the one found on the Series 3 devices.

While the new affordable smartwatch features the latest watchOS 7, the device is powered by the Apple S5 dual-core processor, along with 32GB of internal storage and 1GB RAM. On the contrary, the S5 chip is the same processor used on the previous Apple Watch Series 5. While aimed as a budget smartwatch, the S5 chip is said to offer twice the performance as compared to the old Apple Watch Series 3. 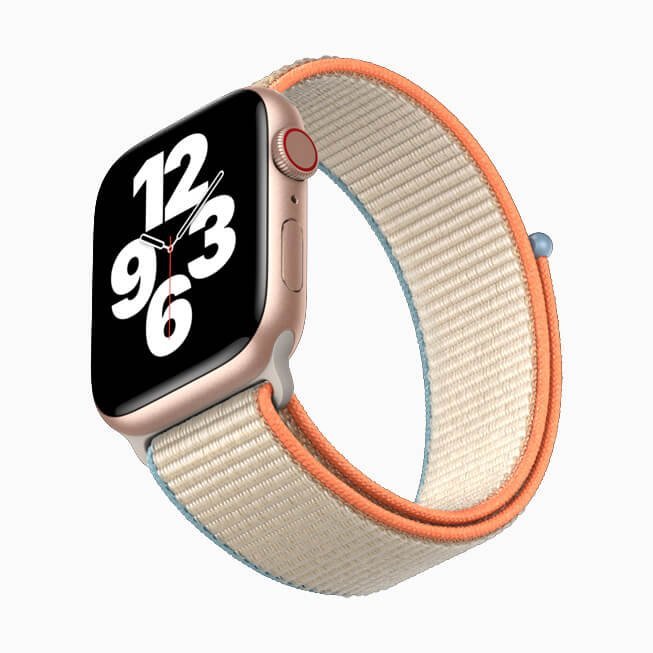 That said, Apple has also included some of the new software features of the watchOS 7, including the new Family Setup, where other members such as your kids and the elderly can use the Apple Watch SE, without the requirement to have an Apple iPhone. Kids will be able to take advantage of the Schooltime which helps them to stay focused while attending classes or during learning sessions at home.

Apple announced Apple Watch SE, packing the essential features of Apple Watch into modern design customers love — all at a more affordable price. The largest and most advanced Retina display allows customers to easily see more details and the information that matters most, right on their wrist. Apple Watch SE features the same accelerometer, gyroscope, and always-on altimeter as Apple Watch Series 6, and with the latest motion sensors and microphone, it offers robust health and safety capabilities including fall detection, Emergency SOS, international emergency calling, and the Noise app.

With watchOS 7, users can take advantage of powerful new features including Family Setup, which allows kids or older family members without an iPhone to enjoy Apple Watch, plus sleep tracking, automatic handwashing detection, and new workouts. Apple Watch SE is available in three beautiful case finishes made of 100 percent recycled aluminum, and compatible with all Apple Watch bands including the new Solo Loop and Braided Solo Loop. 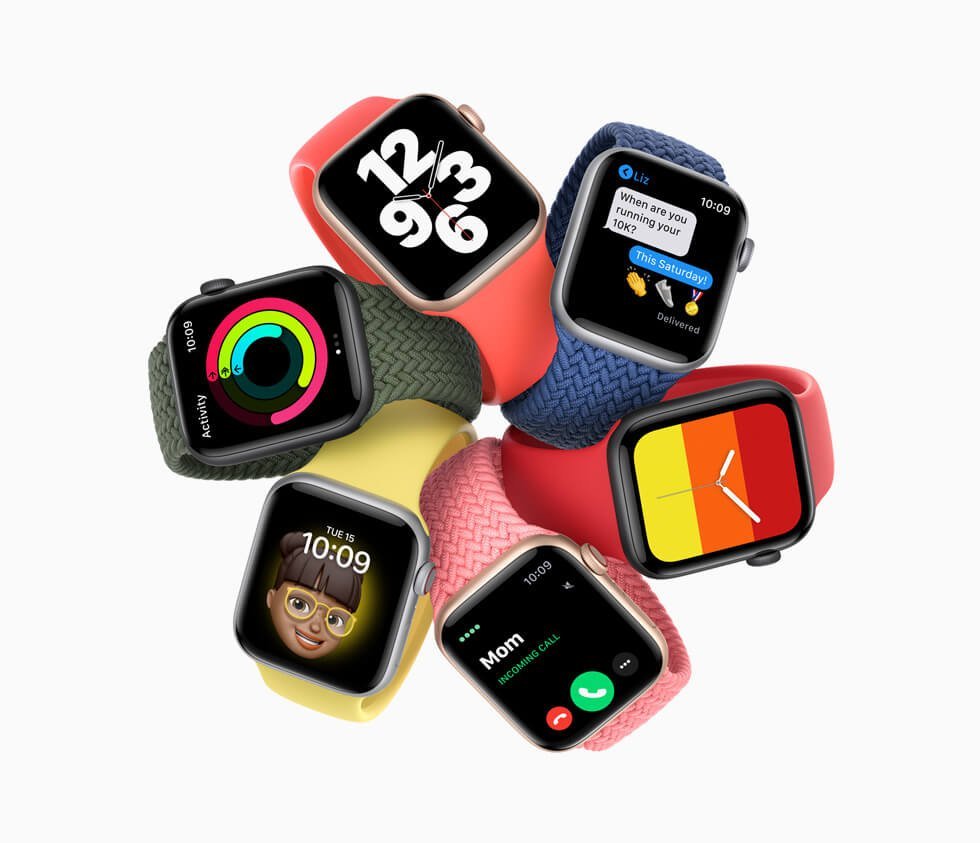 “Apple Watch SE combines elements of the Series 6 design with the most essential features of Apple Watch, all at a more affordable price,” said Jeff Williams, Apple’s chief operating officer. “We’re excited to offer another great option to help customers stay connected, be more active, and keep an eye on their health.”

Apple Watch SE features a stunning Retina display, with thin borders and curved corners, that is 30 percent larger than Series 3. The interface allows for large and easy-to-read app icons and fonts, while complications are precise and informative. A variety of new watch faces are optimized for the display, so customers can easily view notifications, text messages, workout metrics, and more.

With the S5 System in Package (SiP) and a dual-core processor, Apple Watch SE delivers incredibly fast performance, up to two times faster than Apple Watch Series 3. The Digital Crown with haptic feedback generates incremental clicks with an extraordinary mechanical feel as it is rotated. Apple Watch SE features the latest speaker and microphone, which are optimized for better sound quality for phone calls, Siri, and Walkie-Talkie,1 along with Bluetooth 5.0.

The next-generation always-on altimeter provides real-time elevation all day long by using a new, more power-efficient barometric altimeter, along with GPS and nearby Wi-Fi networks. This feature allows for the detection of small elevation changes above ground level, up and down to the measurement of 1 foot, and can be shown as a new watch face complication or workout metric.
The built-in compass provides users with better directions and compass headings, in addition to incline, elevation, and latitude and longitude. Users can add one of three new Compass complications to their watch face, and developers can take advantage of compass information in their apps to create rich experiences.

With Emergency SOS on Apple Watch, customers can quickly and easily call for help and alert emergency services with just a push of a button. For added personal safety while traveling, users with cellular models of Apple Watch SE can complete international calls to emergency services,2 regardless of where the device was originally purchased or if the cellular plan has been activated.

Fall detection uses a custom algorithm and the latest accelerometer and gyroscope in Apple Watch SE to detect when a user falls. By analyzing wrist trajectory and impact acceleration, Apple Watch sends the user an alert after a hard fall, which can be dismissed or used to initiate a call to emergency services. If the watch senses immobility for approximately 60 seconds after the fall, it will automatically call emergency services and play an audio message that provides the user’s location as latitude and longitude coordinates, in addition to sending a message to emergency contacts.

To provide enhanced insights into hearing health, Apple Watch SE utilizes the latest-generation microphone to measure ambient sound levels in a user’s environment. Apple Watch SE sends a notification if the decibel level of surrounding sound has risen to a point that it could cause damage, and users can check noise levels at any time through the Noise app or Noise watch face complication.watchOS 7

Family Setup and Optimized Features for the Entire Family

Family Setup in watchOS 7 extends Apple Watch to the entire family by allowing kids and older family members of the household who do not have an iPhone to benefit from the connectivity, safety, and fitness features of Apple Watch. Kids can take advantage of communication and personalization capabilities, access Emergency SOS at any time, enjoy an Activity rings experience that has been optimized just for them, and utilize a new mode called Schooltime, which can help them stay focused and attentive while learning at home or in the classroom. 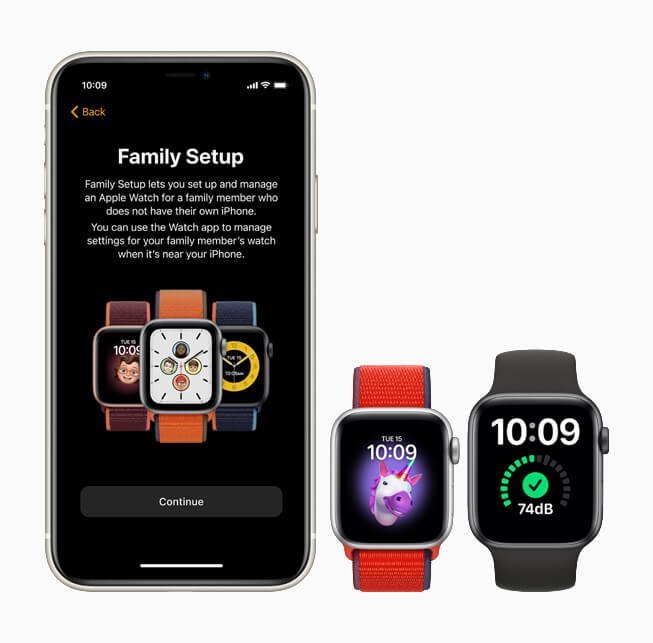 watchOS 7 also offers optimized features for older adults, starting with a simplified onboarding and configuration process, along with a refreshed X-Large face that shows the time and a rich complication at a glance. Older adults can also benefit from a new Health Checklist in the Health app on the iPhone, which offers the ability to track whether health features like fall detection have been enabled in one centralized view. 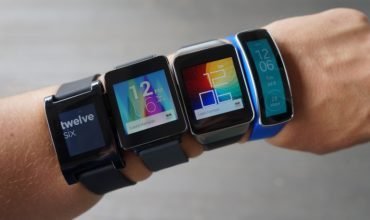 iPhone 6s and 6s Plus hits the shore with du 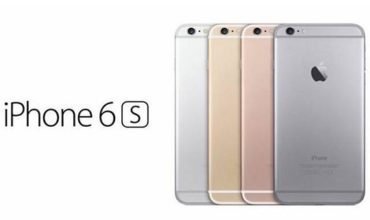