It is without question that Kingston is one of the best brands when it comes to high-quality SATA and NVMe SSD drives. The company had recently announced its high-performance PCIe 3.0 based KC2500 NVMe SSD and we get a chance to take a look at how the new drive performs with respect to data transfer speeds. 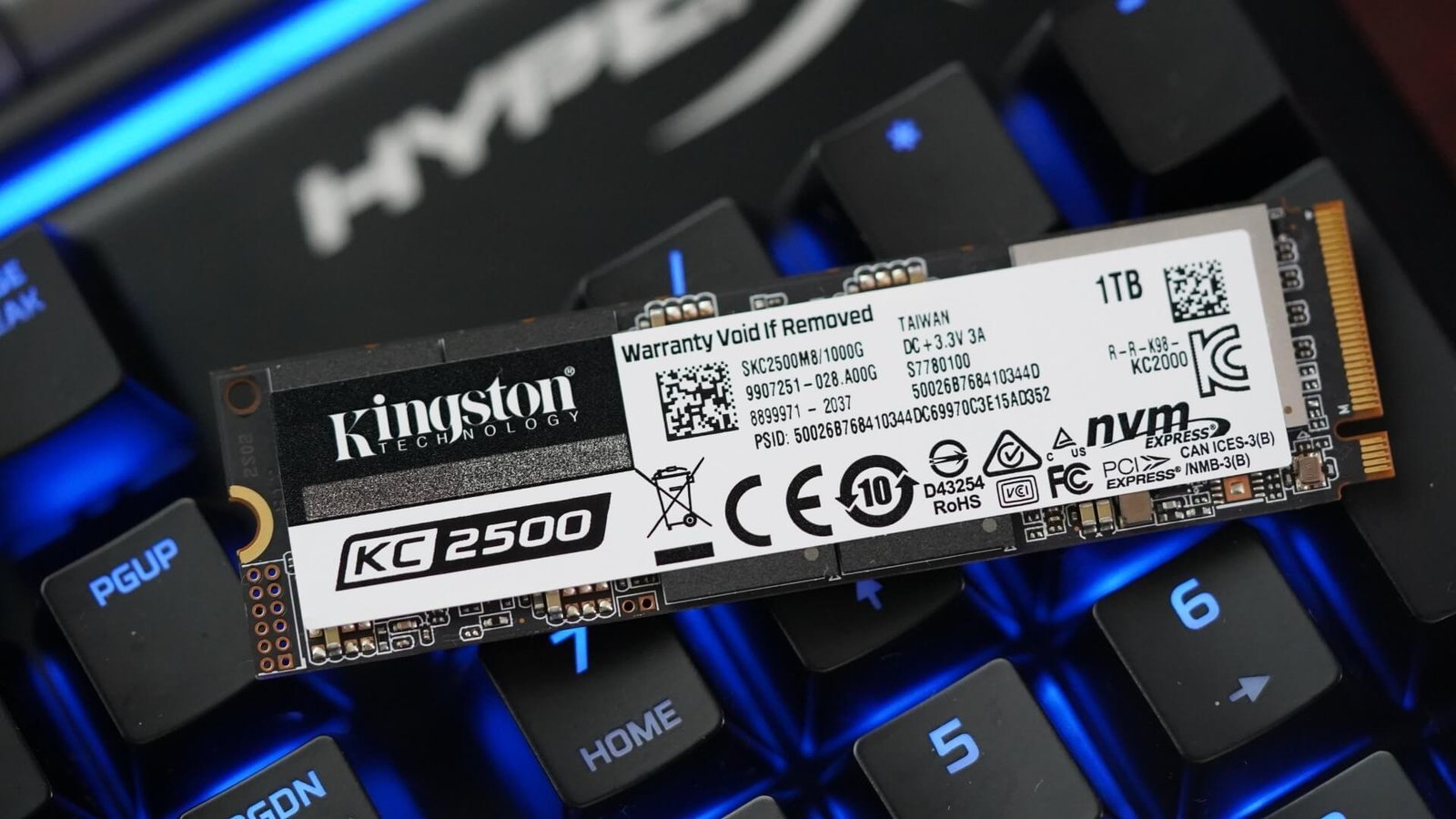 While most of the SATA SSD drives can deliver fast loading time performances and faster copy speeds than a traditional hard drive, NVMe drives can easily push through the limit of over 1TB/s of transfer speeds. And while memory manufacturers have already released several PCIe 4.0 NVMe drives that offer faster transfer speeds, there will be many users who will still stick to motherboards or laptops that support up to PCIe 3.0 x4 drives. Yes, we know that AMD is already on the PCIe 4.0 bandwagon with its X570 motherboards and the fact that even consoles like the Sony PlayStation 5 feature the latest technologies. But we have to agree to the fact that PCIe 3.0 x4 drives are here to stay, and will still be relevant up until there are enough PCIe 4.0 drives on the market at cheaper prices. 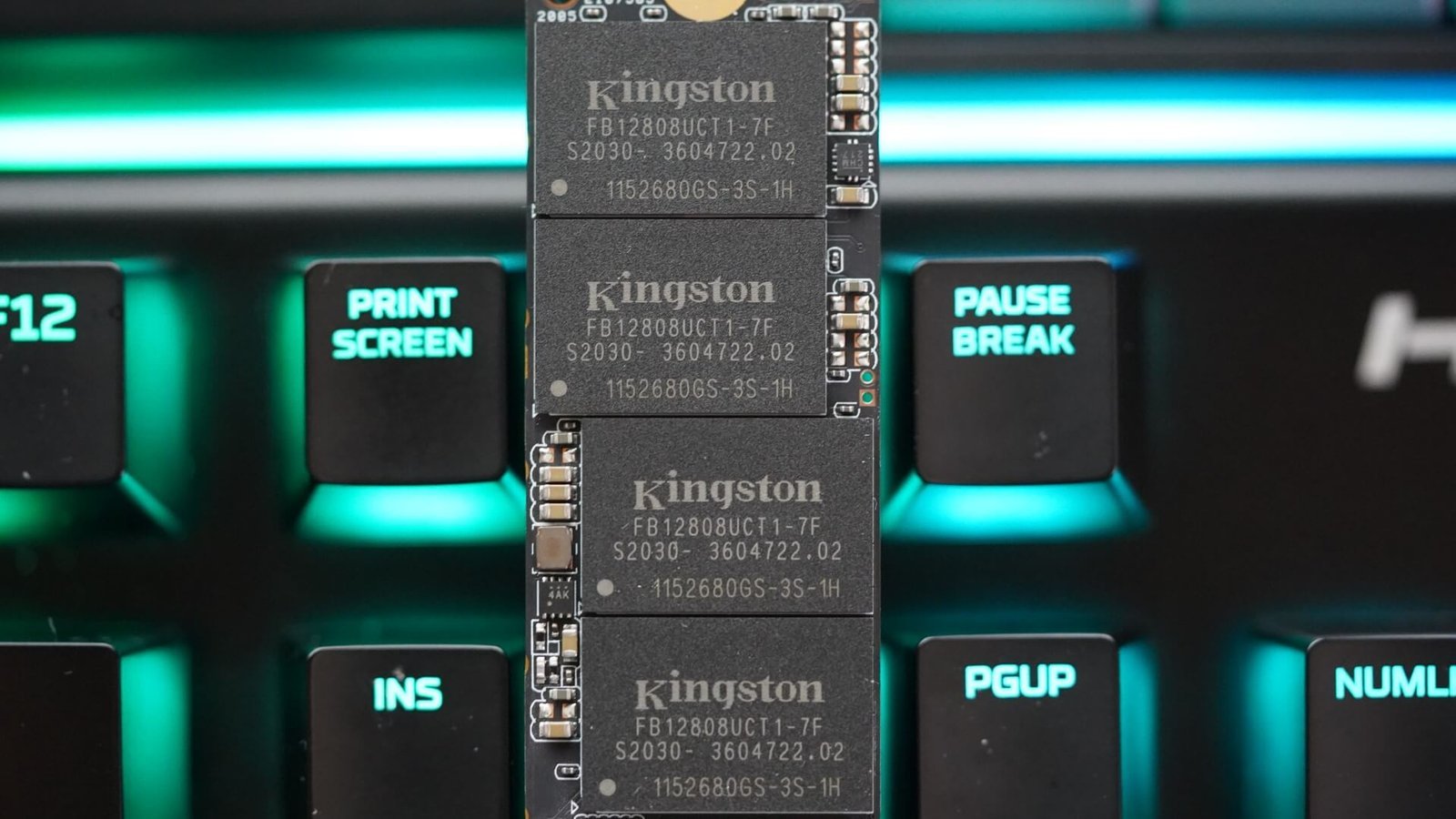 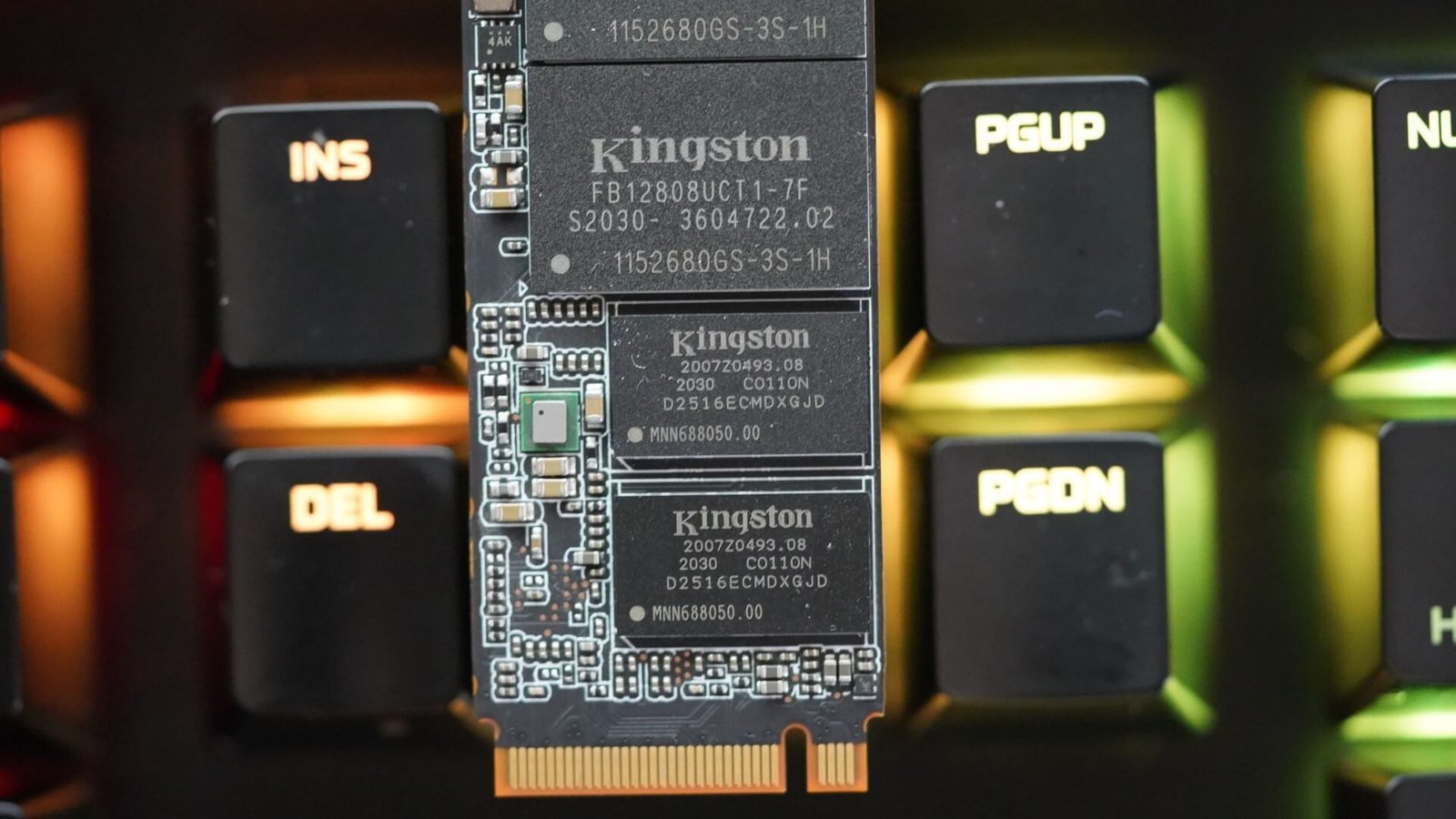 Kingston claims that the 250GB KC2500 model features a modest write speed of 1200MB/s, the 500GB model with a faster 2500MB/s write speed, and the 1TB/2TB drives featuring a write speed up to 2900MB/s. Even though the sequential write speeds are different between the storage options, all of the Kingston KC2500 drives feature the same random 4K read/write capabilities. The random 4K read speed is 375,000 IOPS and the random 4K write performance is 300,000 IOPS.

When it comes to endurance, Kingston claims that the 250GB model features a maximum of 150TBW, followed by the 500GB with up to 300TBW, the 1TB model for 600TBW, and the 2TB variant with up to 1.2PBW. The 250GB and the 500GB model probably may not be a good choice for professional users since the total bytes written per minute capability is a bit on the low side. The 1TB model’s endurance is better than the low-storage offerings and should be able to last longer for daily data transfers. It’s impressive that the 2TB model is rated at 1.2PBW of endurance, something that’s very hard to fill unless you are copying terabytes and terabytes of data on a daily basis. 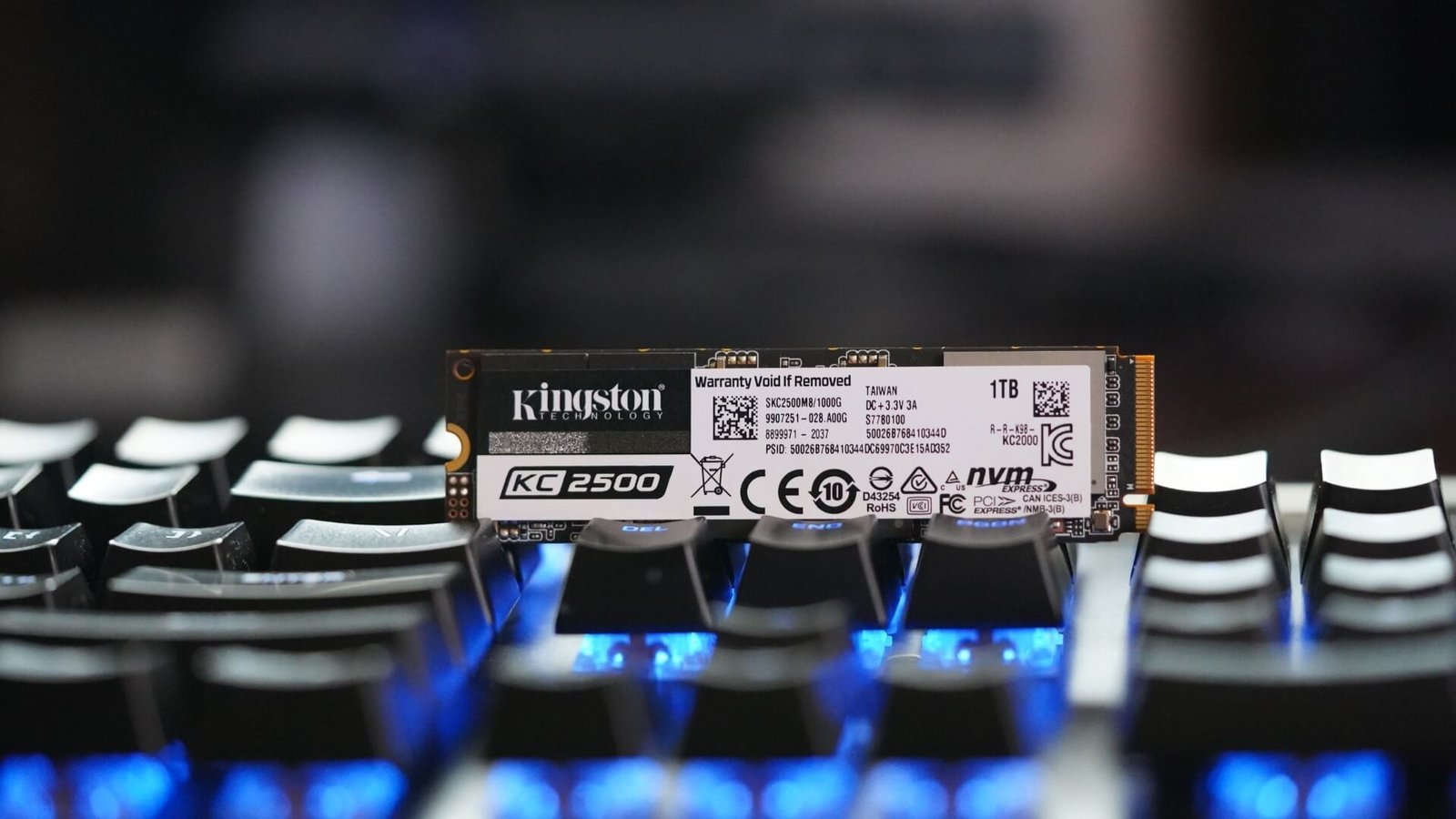 The Kingston KC2500 NVMe drives are designed to operate up to 70 degrees. The SMI 2262EN NVMe controller chip is shielded with a copper plate for better heat dissipation. For those who would like to use the Kingston KC2500 on a laptop, the 250GB model weighs hardly 8g, the 500GB and 1TB weighing just 10g, and the 2GB model weighing just 11g. The difference in weight between the four storage options is negligible. The dimensions of the drive 80mm x 22mm x 3.5mm. The KC2500 also supports the 256-bit XTS-AES encryption. The Kingston KC2500 drive doesn’t come with any sort of heat sink or thermal pad to keep the SSD cool during heavy workloads.

The system in which we tried the Kingston KC2500 NVMe SSD is modest, and it’s not on a high-end system because we are currently on the verge of building an entirely new testbed. Still, the drive should be able to perform well on our current temporary system. The system features the AMD Ryzen 5 3400G APU processor, the MSI B450-A PRO MAX motherboard, 32GB of Kingston HyperX Fury DDR4 RAM clocked at 3000 MHz, Windows 10 Pro 64-bit OS, and more. The MSI B450-A PRO MAX features a PCIe 3.0 x4 port that we used to test the Kingston 1TB KC2500 drive. Our tests include CrystalDiskMark and HD Tach for theoretical performance indication, along with real-time copy speeds of 10GB files and 40GB files to showcase the copy speeds and the time it took to finish the process. We also took note of the temperatures of the drive while the KC2500 was put under heavy load. As we mentioned before, the KC2500 features a read and write speed up to 3500MB/s and 2900MB/s, respectively. From our CrystalDiskMark 7.0 tests, the sequential read speeds on 1GiB and 2GiB are up to 3530MB/s and the sequential write speeds up to 2860MB/s. The CrystalDiskMark tests were done in two rounds. We also tried CrystalDiskMark with 8GiB and received similar results. And as for HD Tach, the Kingston KC2500 NVMe SSD was able to achieve up to 900MB/s read speed and up to 1250MB/s burst speeds. Do keep in mind that the KC2500 is much more capable as compared to the results by HD Tach. 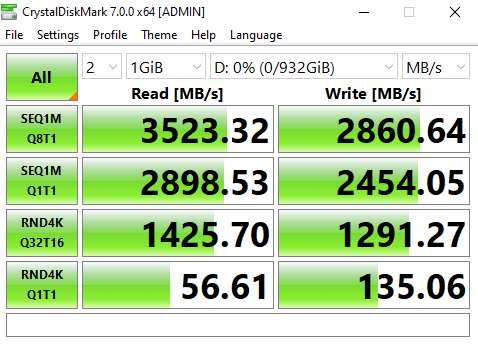 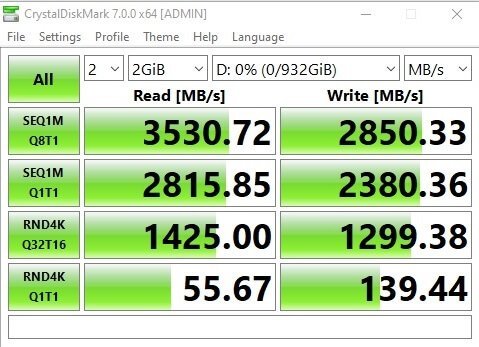 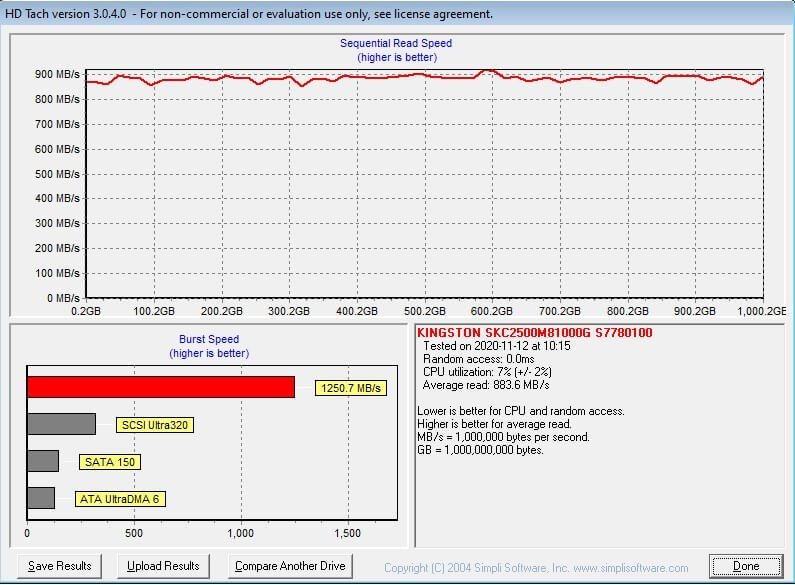 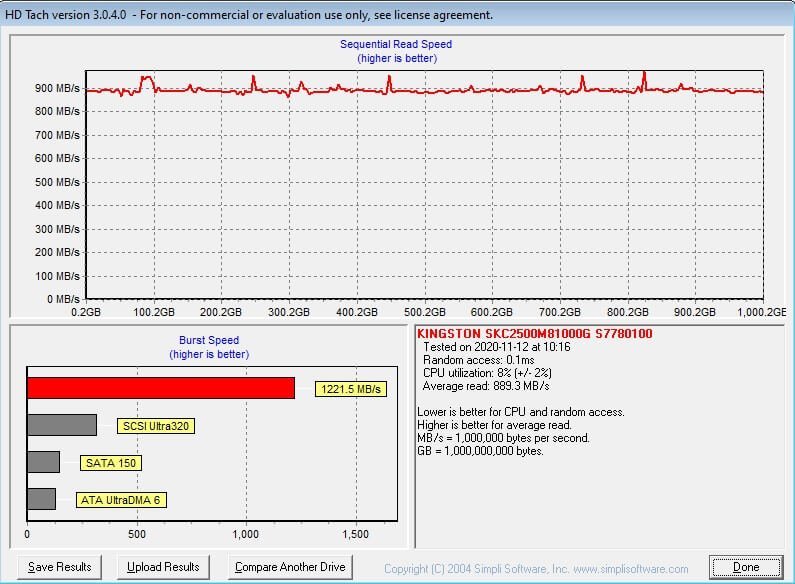 While theoretical benchmark tests are one thing, it all comes to how the Kingston KC2500 performs in real-life situations. We tested the Kingston KC2500 drive with multiple 10GB files to check the copy speeds, find how long the cache lasts, how much does the write speed drops down when the DRAM cache runs out, and more. Our first test included copy a single 10GB file within the drive and we got a peak write speed of 1.91GB/s. The KC2500 took 5.2 seconds to copy a single 10GB file.

Our second test includes copying multiple 10GB files and the write speeds were similar. We also prepared two 40GB files and write speeds were a bit lower at 1.06GB/s. The transfer took almost 1 minute and 17 seconds to finish up. To test the writing speed of the drive when the DRAM cache is full, we copied multiple 40GB files in one go and the write speeds went down to 590MB/s on average. We were able to actually max out the DRAM after several tries of copying several 40GB files. We were impressed with how long the DRAM is able to hold on and maintain the write speeds above 1GB/s most of the time. It should be noted that during all our tests, the temperatures of the Kingston KC2500 while under load, went up to 41 degrees celsius. And this was on an enclosed PC case with no heat sink used on the SSD. 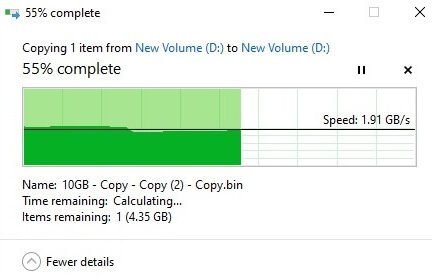 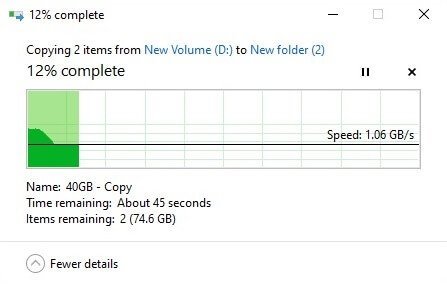 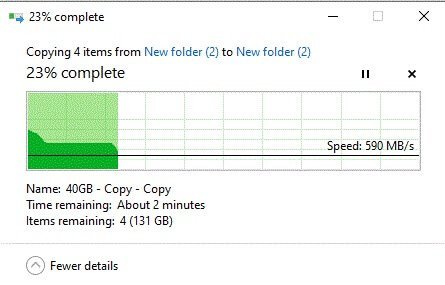 Write speed when DRAM runs out

There is no doubt that PCIe 3.0 x4 drives still packs a punch with respect to read and write speeds. And while PCIe 4.0 drives are already here in the market, it’s surely going to take some time until the new standard will become mainstream among users. But till then, if you aren’t ready to make the jump to next-generation drives yet, then PCIe 3.0 x4 NVMe drives will remain to be the best alternative for gamers, creators, and consumers. And the Kingston KC2500 NVMe SSD drive has impressed us with its read and write performance. While NVMe SSDs are generally affordable and can deliver fast performances, the Kingston KC2500 is one of the few premium PCIe 3.0 x4 drives that push the limit up to 3500MB/s read speeds, which should let users load heavy files easily, and write speeds up to 2900MB/s, which should let you copy a large number of files or large-sized files in a short span of time. 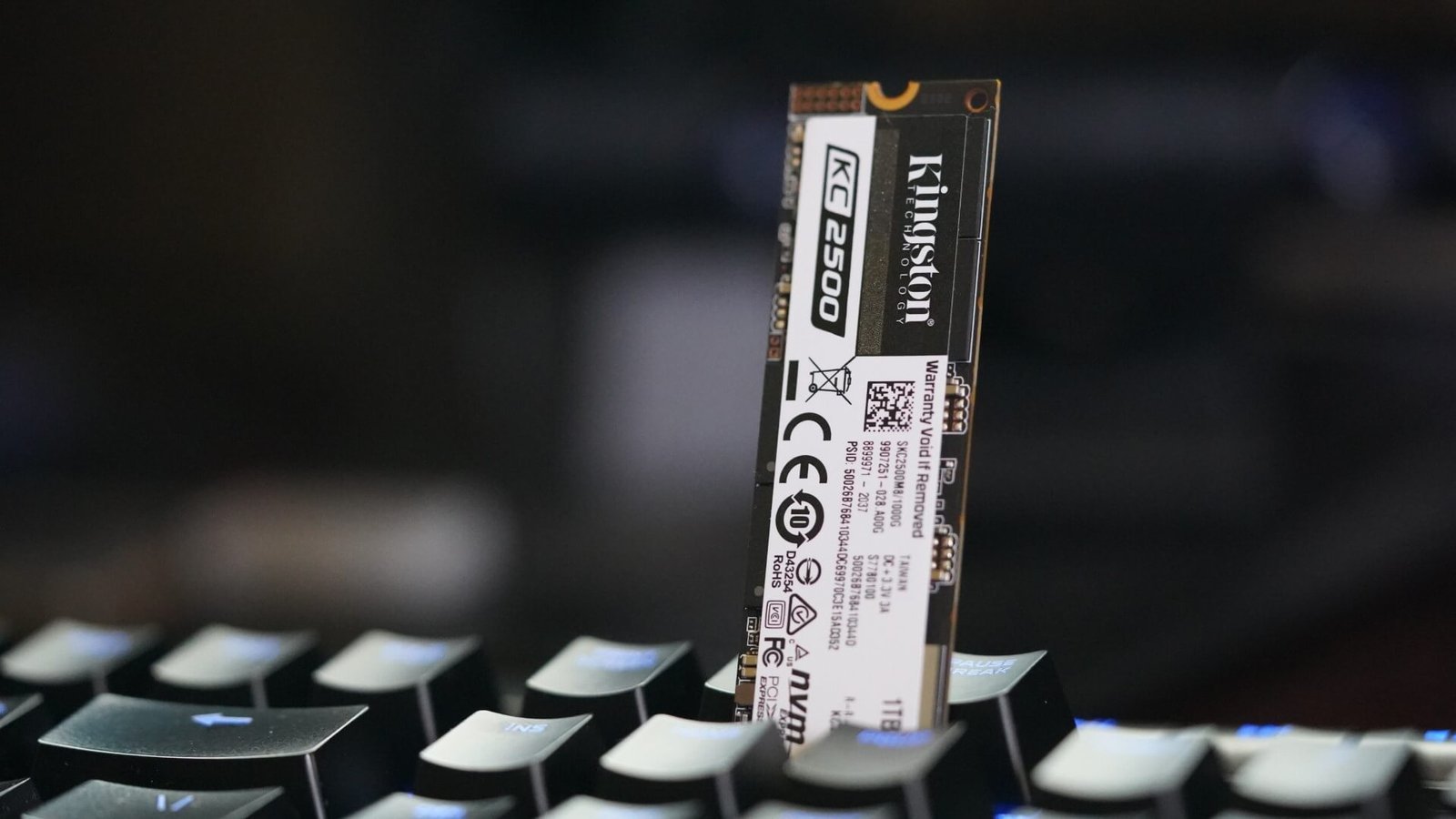 While the performance of the KC2500 is nowhere near what PCIe 4.0 drives can do, Kingston’s new drive should be able to handle heavy workloads. The endurance for the 1TB and 2TB TLC models are rated at 600TBW and 1.2PBW, respectively, and that is something where creators should take note of. After all, you would not want your NVMe to wear off when your work involves copying large data on a daily basis. The drive also packs 1GB of DRAM, which is very helpful in maintaining the fast transfer speeds as long as possible. The drive also offers native support for 256-bit XTS-AES encryption, so all those who would like to secure their data can consider this drive. You may need to buy an additional heatsink to keep things cool but the KC2500 can stand on its own with acceptable temperatures while under heavy load.