The new NVIDIA GeForce RTX 30 Series GPUs, the 2nd generation of RTX, features new RT Cores, Tensor Cores, and streaming multiprocessors, bringing stunning visuals, amazingly fast frame rates, and AI acceleration to games and creative applications. Powered by the NVIDIA Ampere architecture, which delivers increases of up to 1.9 times performance-per-watt over the previous generation, the RTX 30 Series effortlessly powers graphics experiences at all resolutions, even up to 8K at the top end. The GeForce RTX 3090, 3080, and 3070 represent the greatest GPU generational leap in the history of NVIDIA. From top to bottom, the ROG Strix GeForce RTX 30 Series has received a host of improvements to deliver the next wave of innovation in thermal design and accommodate the impressive NVIDIA Ampere architecture.

A new shroud with metal accents encompasses a trio of Axial-tech fans that have been tuned to fulfill specialist roles. The central fan leverages a full-height barrier ring and 13 fan blades that provide boosted static pressure to drive air through the heatsink fins and onto the GPU heat spreader. The two fans on the flanks feature 11 blades and half-height barrier rings to allow for more lateral dispersion and to provide better airflow through the cooling array. Turbulence between fans is reduced thanks to a reversal of the center fan’s rotational direction. 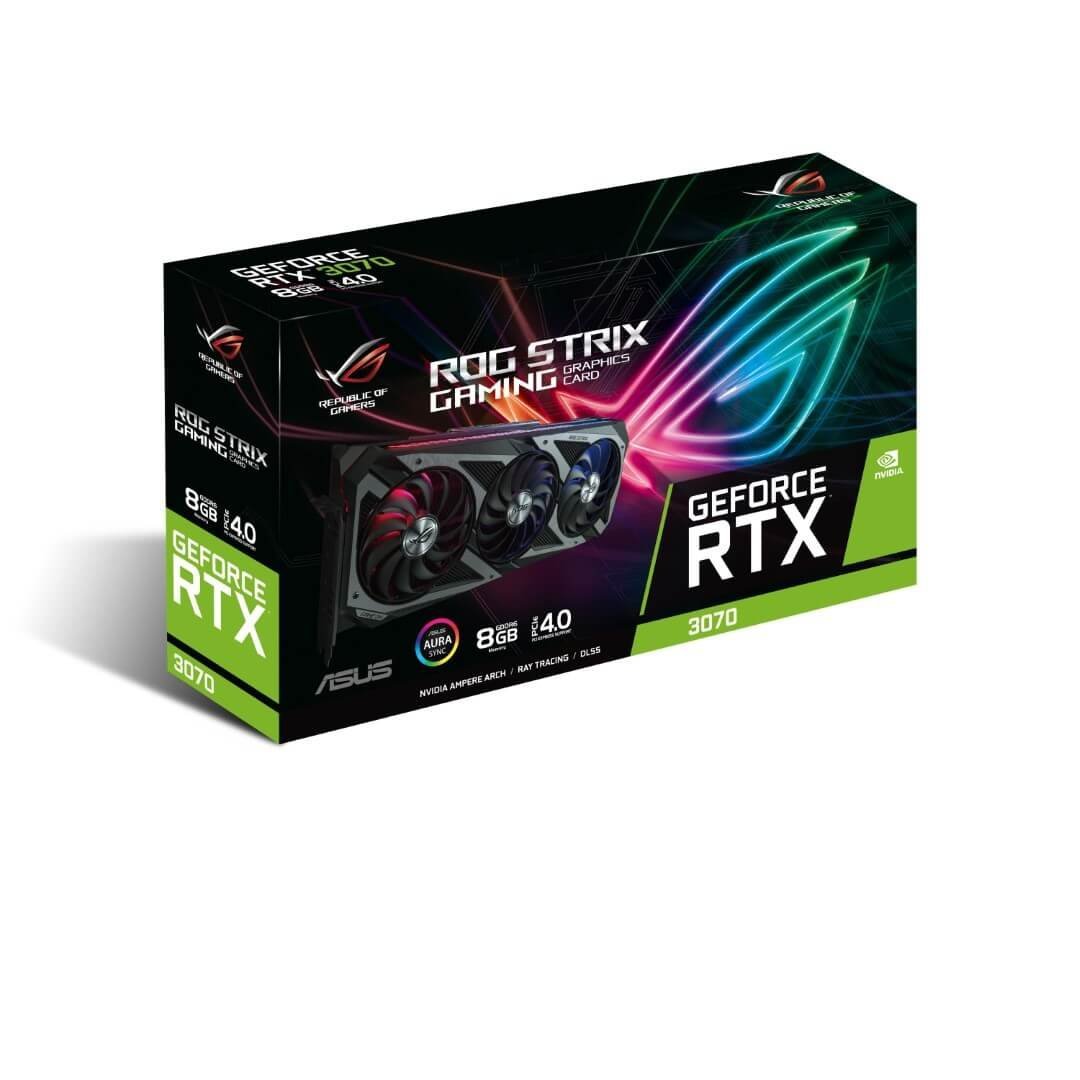 A larger heatsink that fills most of the card’s 2.9-slot footprint was designed to leverage the increased airflow. To get heat up off the die and into the heatsink array, the surface of the heat spreader is polished with MaxContact technology, which improves smoothness at the microscopic level. The extra flatness allows for better contact with the die for enhanced thermal transfer. 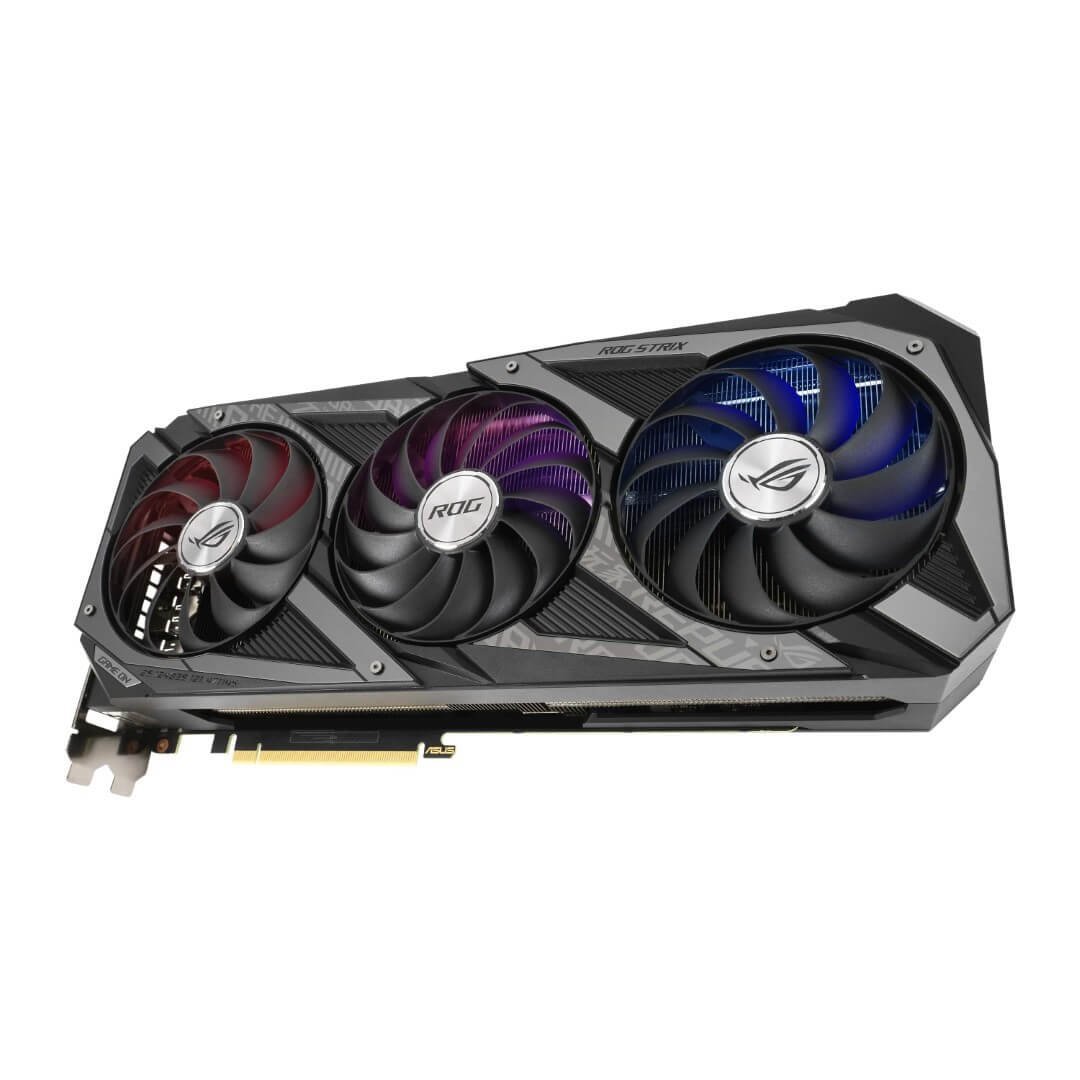 Also included are FanConnect II headers that allow PWM fans to be tuned based on CPU and GPU temperatures, providing extra intake or exhaust for demanding 3D tasks and compute workloads. Builders looking for a quick and simple way to adjust the card’s default behavior can flick an onboard Dual Bios switch to choose between “performance” and “quiet” profiles without software. Another ease-of-use feature is an onboard voltage-sensing circuit that monitors PSU rail voltage. The circuit is fast enough to catch any transients that result in the rail voltage dropping too low. If that happens, a red LED will light up to indicate a power supply issue, making it easier to debug the source of crashes during gameplay. 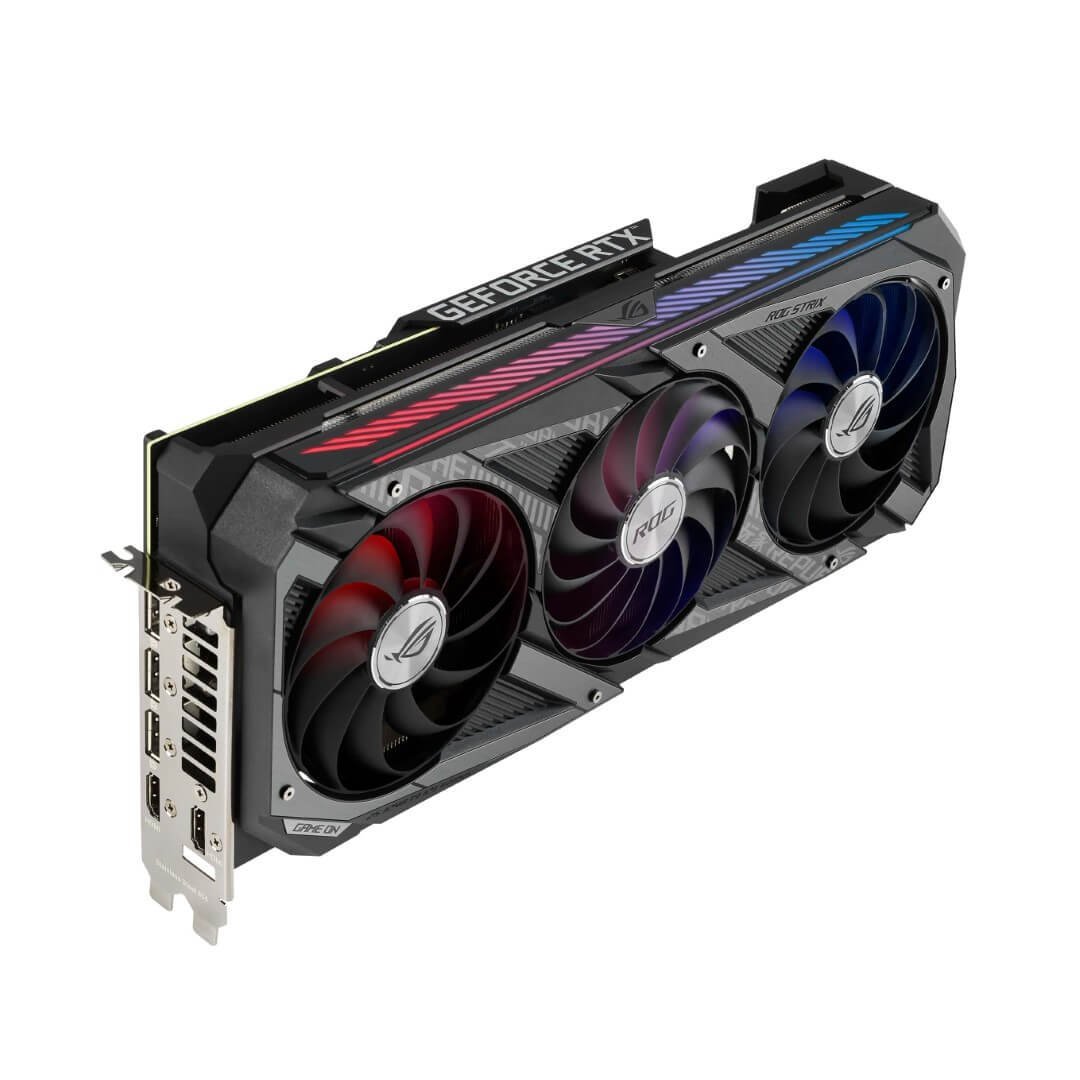 The front side of the GPU has also been buffed up. An addressable RGB element can be customized with Armoury Crate software, and the Strix’s reinforced metal frame adds a literal layer of durability.

Flipping the card around reveals a metal backplate with a wide vent. The vent allows hot air to escape towards chassis exhaust fans instead of being recycled back into the GPU cooler. Beneath the GPU, a bracket provides consistent mounting pressure between the die and heat spreader. Stainless steel is used for the I/O bracket to protect ports and provide a more secure mount.

The sum of all the design improvements found on the ROG Strix GeForce RTX 30 Series GPUs results in a massive leap forward in thermal design. Paired with the outstanding performance of NVIDIA Ampere architecture, gamers now have access to fresh experiences, from insane frame rates in competitive titles, to smooth high-res gameplay in immersive AAA games. 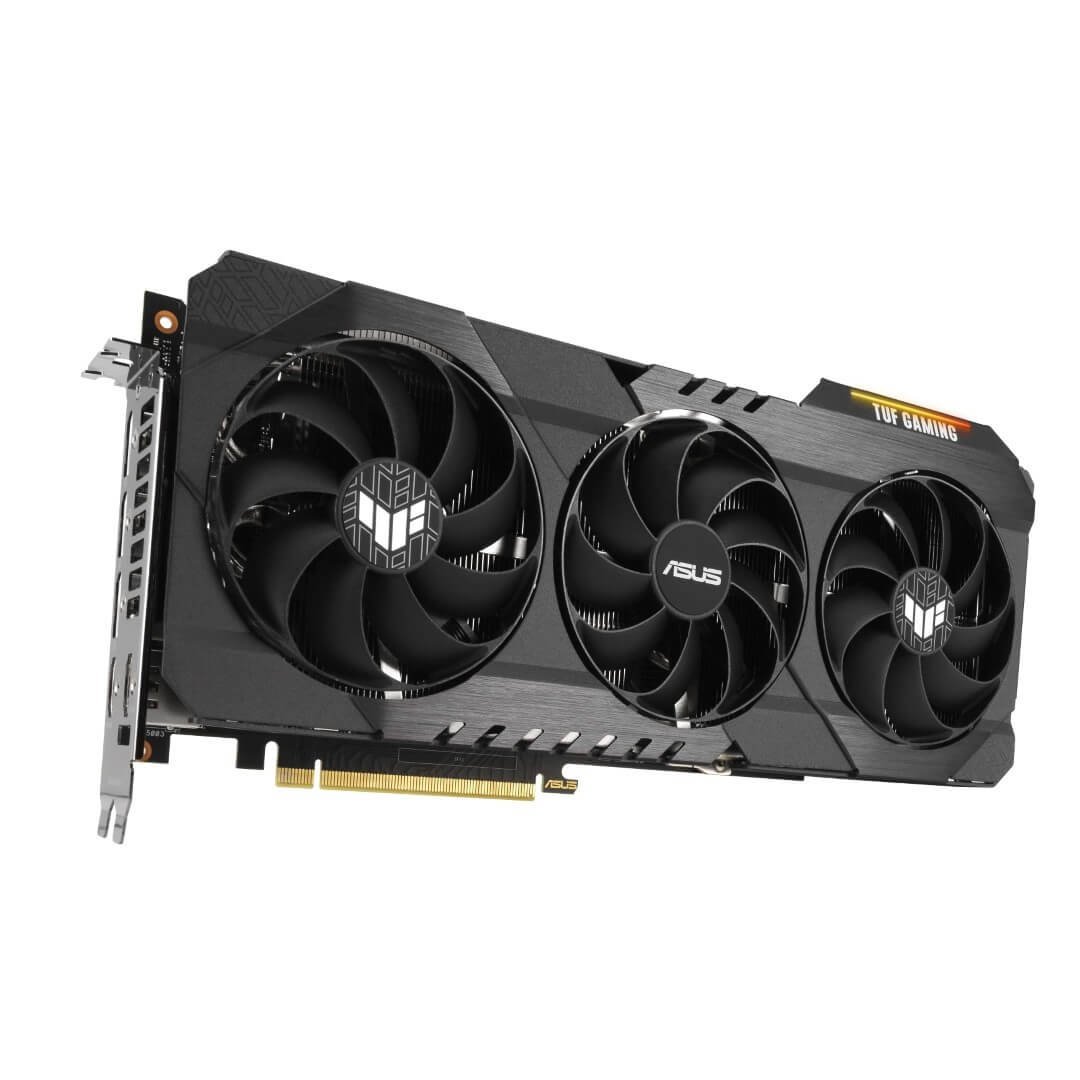 The TUF Gaming GeForce RTX 30 series has been stripped down and built back up to provide more robust power and cooling. A new all-metal shroud houses three powerful axial-tech fans that utilize durable dual ball fan bearings. Fan rotation has been optimized for reduced turbulence, and a stop mode brings all three fans to a halt at low temps. Beneath, independent heatsinks for the GPU and memory keep thermals under tight control. In-line with the TUF Gaming legacy, components are selected based on their durability and performance. In addition to top-shelf chokes and MOSFETs, capacitors that meet military-grade certification make the TUF stand tall amongst the competition. The Auto-Extreme automated manufacturing process ensures components are placed and attached accurately. And, to ensure flawless performance when it counts, the cards are subjected to a grueling 144-hour validation trial.

Most of the rear is swathed in a protective metal backplate that prominently features a wide vent. The vent allows hot air to escape towards chassis exhaust fans instead of being recycled back into the GPU cooler. Beneath the GPU, a bracket provides consistent mounting pressure between the die and heat spreader. Stainless steel is used for the I/O bracket to protect ports and provide a more secure mount. A conveniently placed Dual Bios switch allows customization of the card’s default performance profile without software.

For a builder looking for a new “old faithful,” this card has their back.

Delivering the latest NVIDIA Ampere architecture experience in its purest form, the ASUS Dual GeForce RTX 3070 melds performance and simplicity like no other. Leveraging advanced cooling technologies derived from flagship graphics cards, the Dual opts for substance over style, the perfect choice for a well-balanced build.

A clean shroud matches the aesthetic of workstations and decked out gaming rigs alike. Two tried-and-true Axial-tech fans provide ample airflow and the fans come to a halt automatically at low temperatures.

For gamers, content creators, and enthusiasts who want a robust plug-and-play experience, the ASUS Dual GeForce RTX 3070 is ready. 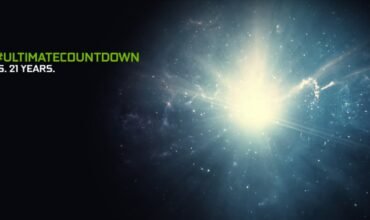 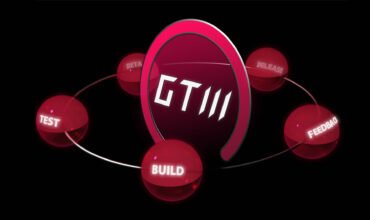