The wait is finally over as NVIDIA has officially unveiled its latest Ampere based graphics cards. The company has introduced the GeForce RTX 3090, its most powerful and fastest graphics card ever made, and is the direct successor to the previous RTX 2080 Ti. The design of the new RTX 3090 graphics is just like the leaked renders. And as you see, the card looks entirely different from the previous Founders Editions released. There are a total of two axial-based fans with each located on either side of the card. It’s a push-pull technique that helps to keep the flow of the heat out of the card efficiently. And the card also performs quieter than other axial-based fans found on other cards. The newly redesigned heatsinks make use of aluminum alloy, a hybrid vapor chamber, and nano-carbon coating, all to keep the temperatures cool while the GPU performs well. 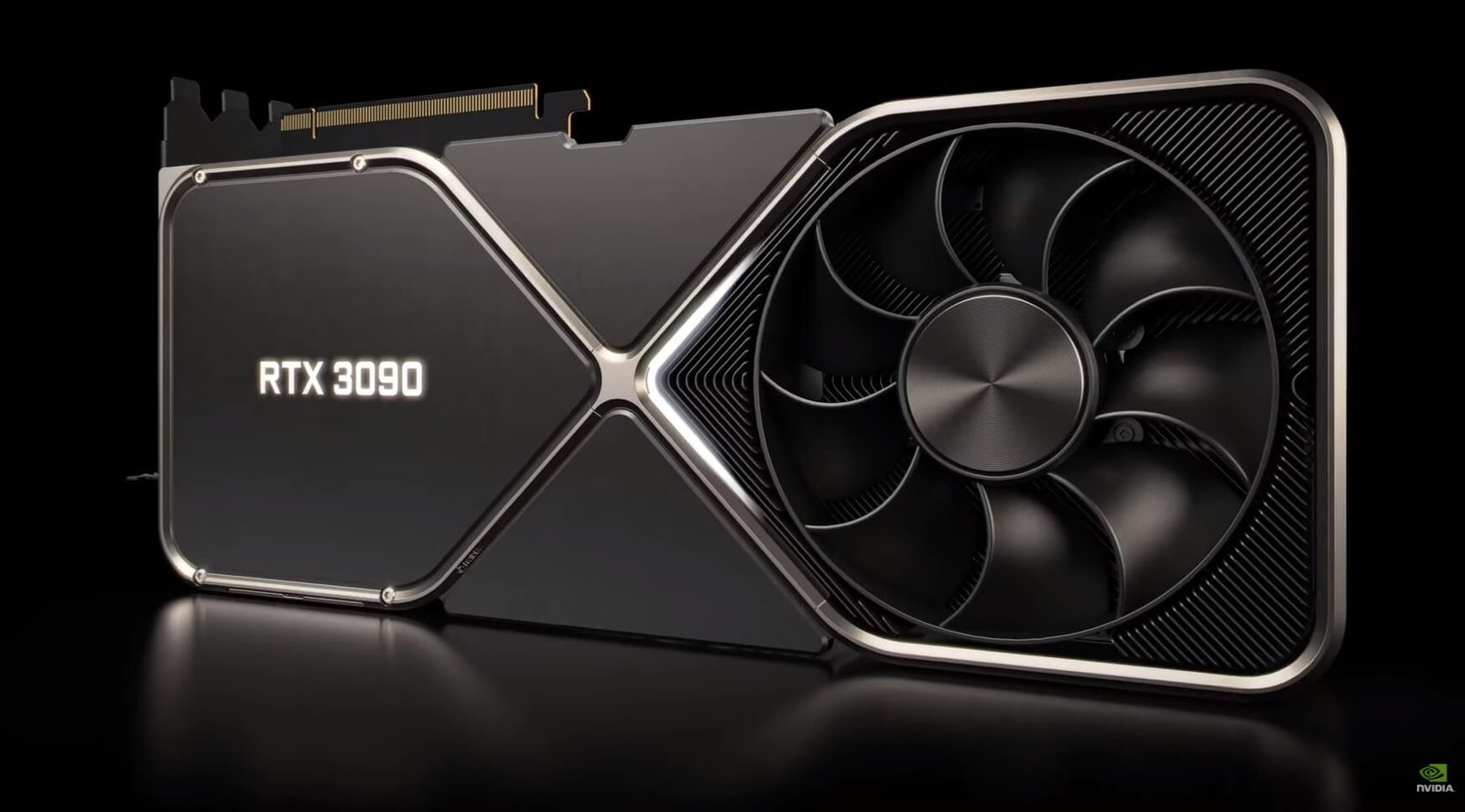 NVIDIA’s latest Ampere GPUs are based on the Samsung 8nm fabrication and when it comes to the RTX 3090, the card uses the Ampere GA102-300 chip. The chip clocks at 1400 MHz as its base speed and cranks up to 1700 MHz for boost speeds. The GA102-300 chip can chunk out a massive 36 TFLOPs of computing performance, unseen in any other consumer card to date. And with RT, the card has a compute performance of 69 TFLOPS. NVIDIA claims that the new second-generation RT cores deliver 2X the performance as the original RT cores. The third generation Tensor cores used in the card features 2x the throughput as compared to the previous generation. As for the performance, NVIDIA claims that the RTX 3090 crushes the previous generation RTX Titan card by 50% performance uplift. Ray-tracing performance has also improved significantly. The most important part is that NVIDIA says the card is powerful enough to run demanding games at 8K resolution and more than 60fps with DLSS turned on. The card also features HDMI 2.1 ports, which is necessary if you want to play at that high resolutions and framerates on an 8K display. It’s pretty obvious at this point that the card will be able to handle almost all games at 4K and perhaps even achieve 120 fps since there are already 4K monitors and 4K TVs out there at 120Hz refresh rates.

NVIDIA also equipped the RTX 3090 with a whopping 24GB of Micron based GDDR6X RAM and works with a 384-bit memory bus. The memory speed on the RTX 3090 is clocked to run at 19.5 Gbps and supports a bandwidth of 936 Gbps. It should be noted that the RTX 3090 features a CUDA count of 10496 cores. The PCB used in the new card is also touted to be a very advanced and compact, featuring over 20 power chokes, 18 phases, and another 2 phases of power for the memory. NVIDIA claims that the new PCB is designed with overclocking in mind so gamers can crank it up to get a significant performance boost. 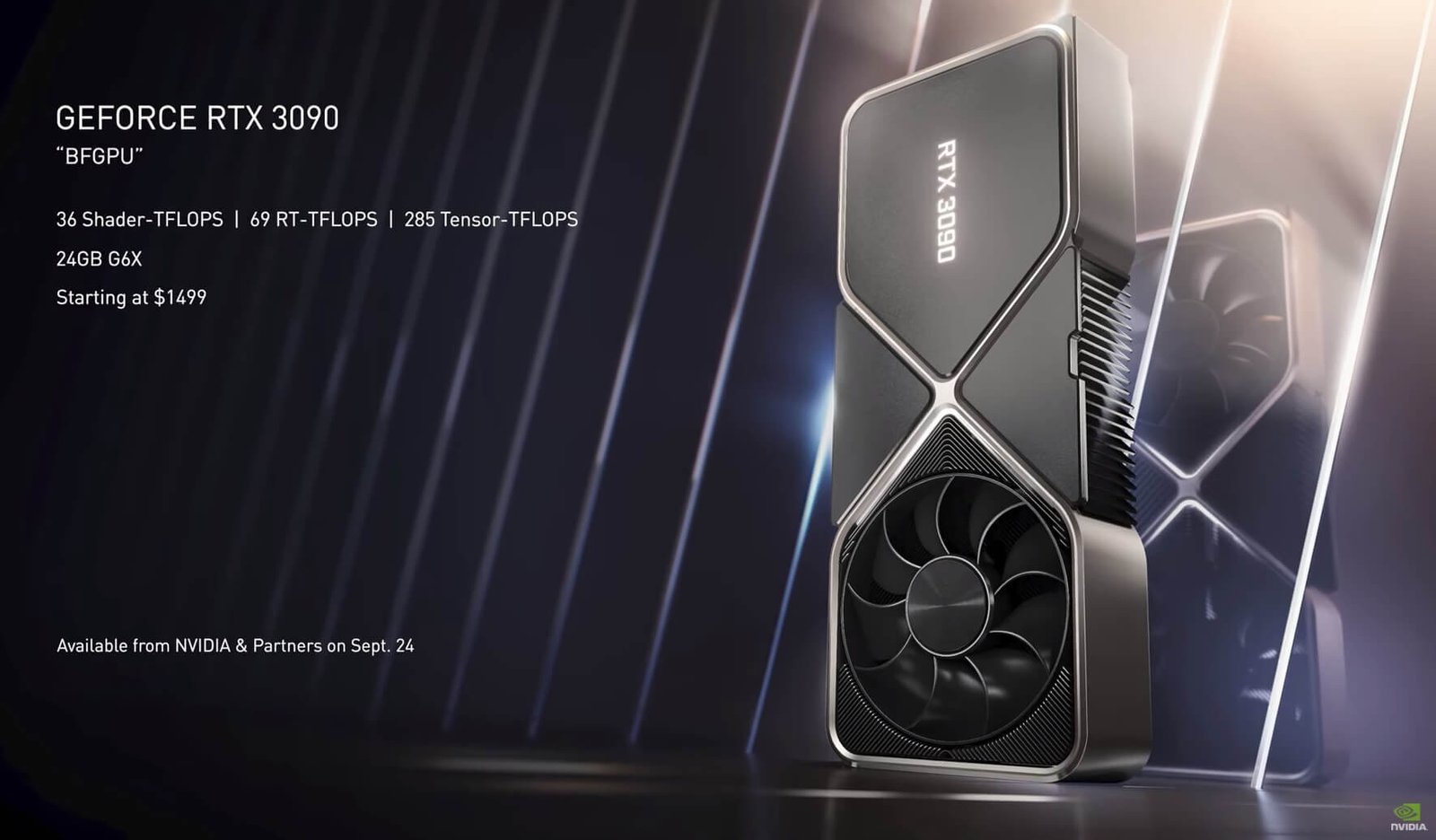 While the card does feature the 12-pin Micro-fit 3.0 power connectors, gamers will not need to worry about compatibility issues as the card will be shipped with 2x 8-pin to 1x 12-pin connectors. The NVIDIA GeForce RTX 3090 Founders Edition is priced at 1400 dollars (Approx. 5142 AED) and is set to be released later this month. 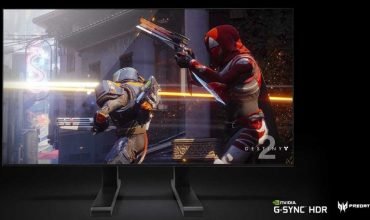 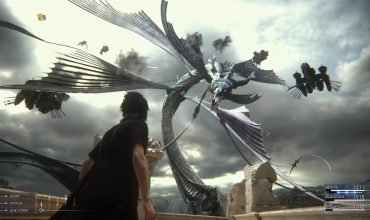