ASUS Republic of Gamers (ROG) has officially announced the Strix SCAR 15 G533 and Strix SCAR 17 G733, premium gaming laptops for the UAE, engineered from the ground up to give esports players an uncompromising experience in competitive tournaments.

The flagship Strix SCAR 17 G733 integrates the latest innovations to keep the most demanding esports players at the top of their game. With a fast 300Hz refresh rate and 3ms response; drives it with powerful new GeForce RTX 30 Series GPUs and Ryzen 5000-Series mobile processors; and helps the hardware reach its full potential with radically redesigned fans and other cooling upgrades.

Play at pro speed with 300Hz
For esports players, waiting an instant too long can put victory out of reach. That’s why ROG has led the adoption of high refresh rates in gaming laptops and continues to push the limits of panel technology. The Strix SCAR 17 G733 features the world’s fastest laptop display, a 17.3” IPS-level panel that combines a Full HD resolution with a 300Hz refresh rate and 3ms response time. Compared to the 240Hz standard common for tournaments, a 300Hz refresh rate reduces the delay between new frames by 33%. 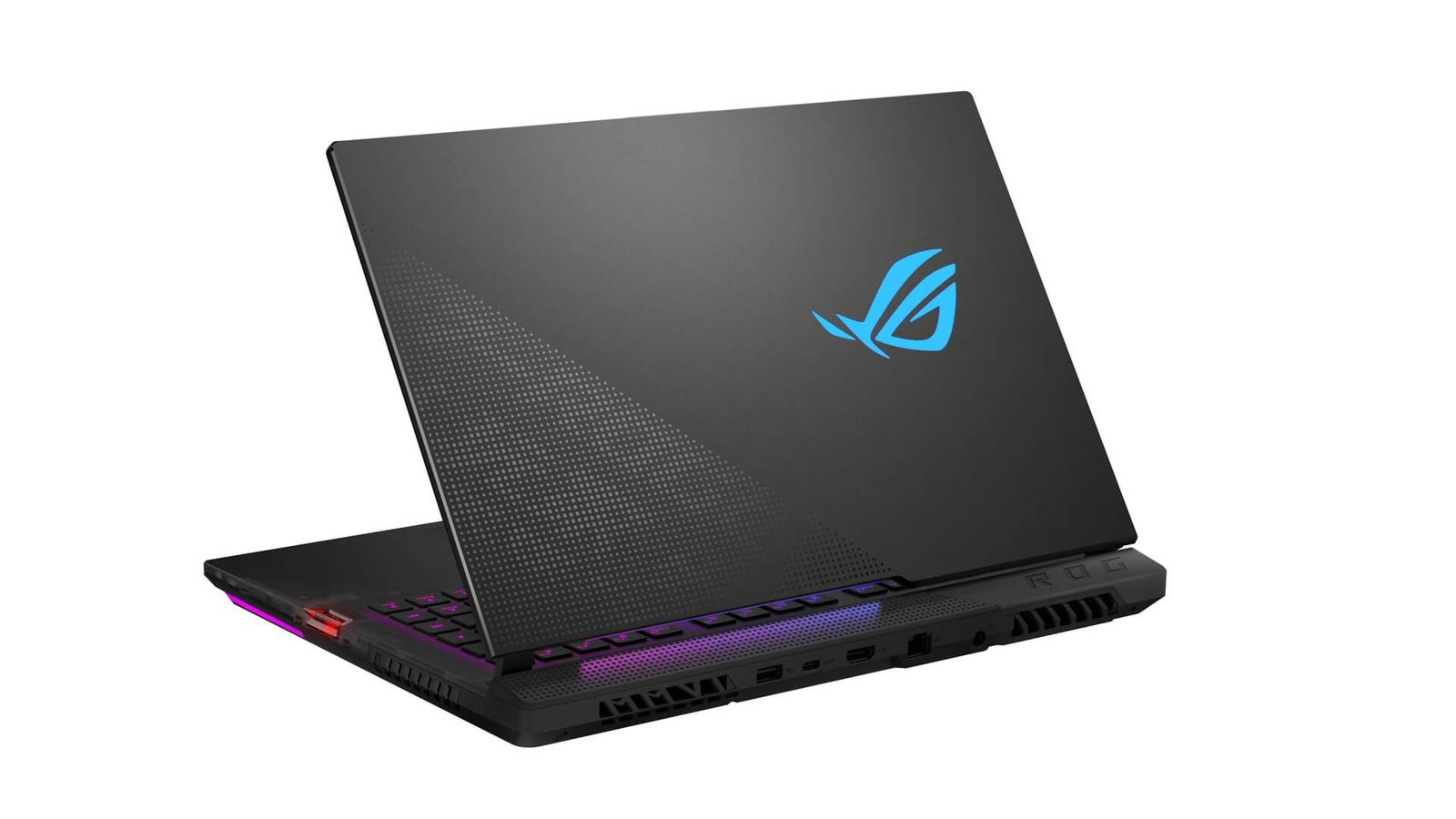 The smaller Strix SCAR 15 G533 has a 15.6” screen with a 300Hz refresh rate and 3ms response time. In a first for Strix, Adaptive-Sync technology is standard across the entire series. It synchronizes the display’s refresh rate with the GPU’s frame rate to eliminate screen tearing, minimize stuttering, and reduce input lag.

Based on NVIDIA’s new Ampere architecture, the GeForce RTX 3080 is clocked up to 1645MHz at 115W with ROG Boost, with another 15W available from Dynamic Boost. It combines new streaming multiprocessors with 2nd gen RT cores and 3rd gen Tensor cores to enable the most realistic ray-traced graphics and advanced AI features. These improvements enable lifelike visuals while pushing frame rates to new heights. They’re backed by support for NVIDIA Reflex technologies that lower latency in select multiplayer games and NVIDIA Broadcast effects that add instant polish to live streams. 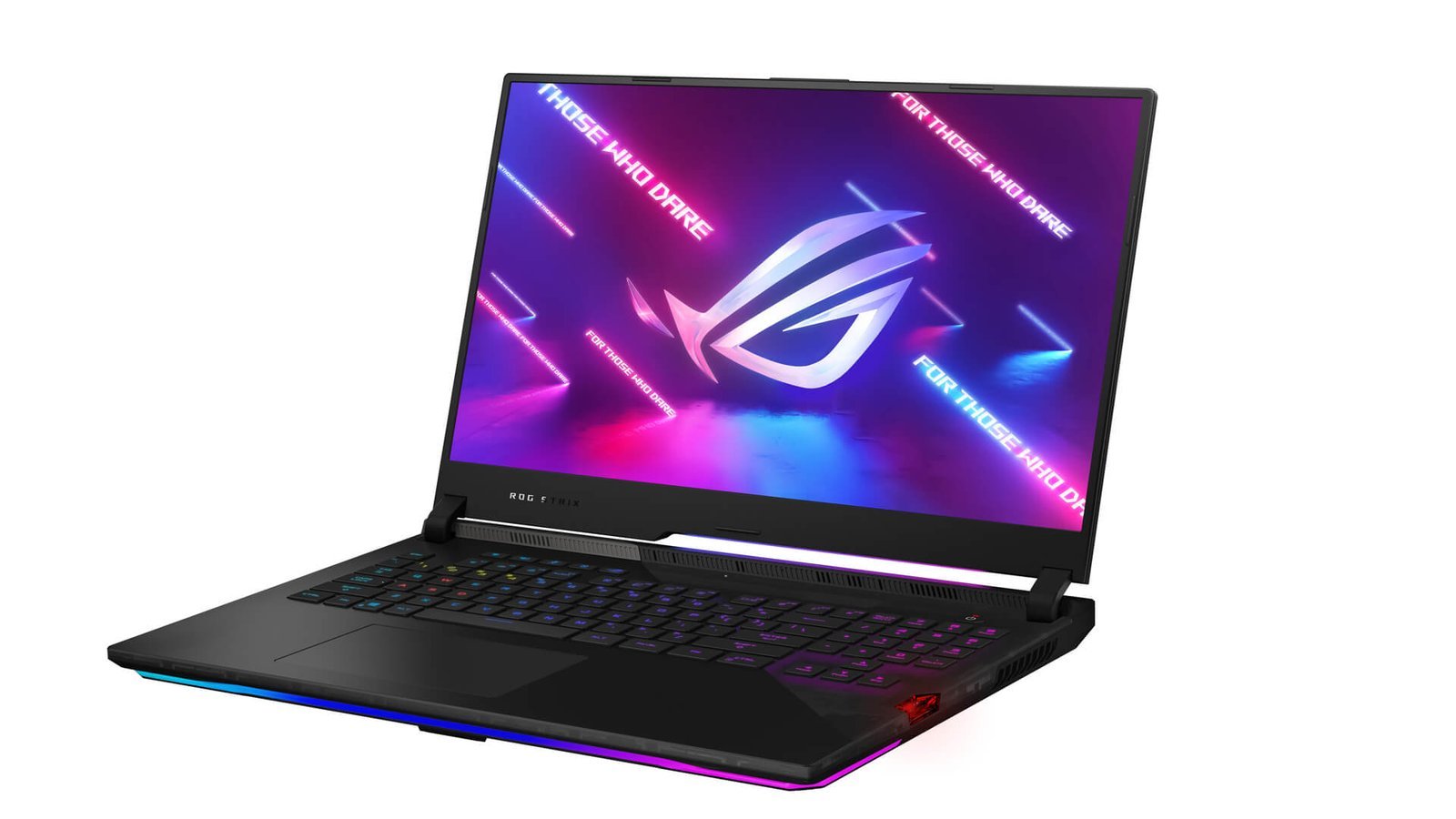 The Ryzen 9 5900HX uses 8 cores and 16 threads to power through demanding multitasking like gaming while streaming, recording, and interacting with an audience. AMD’s new Zen 3 architecture raises performance per clock thanks to lower cache-access latency and numerous other architectural tweaks. ROG’s robust cooling and power delivery allow the 5900HX to run on up to 54W of sustained power when the GPU is active and 80W on its own. The CPU is unlocked, allowing users to push for higher speeds with overclocking.

In its top configuration, the SCAR 17 G733 is available with 32GB of DDR4-3200 RAM and dual hyper 1TB solid-state drives. The memory and storage are fully upgradeable with an easy-upgrade design and pop-open screw that allow quick access to the system’s two SO-DIMM slots and twin M.2 slots.

Optical mechanical keyboard
Regular laptop keyboards push conductive membranes together to detect keystrokes. This electrical approach creates a lot of signal noise at contact, requiring a debounce delay of 5ms to ensure accuracy. Any delay is detrimental in esports, so the new optical-mechanical switches in the 2021 Strix SCAR series trigger using a precise infrared laser beam instead, eliminating the debounce delay and reducing the response time to only 0.2 milliseconds. The optical mechanism is also much more durable than conventional alternatives, extending the switch’s lifetime to 100 million presses. 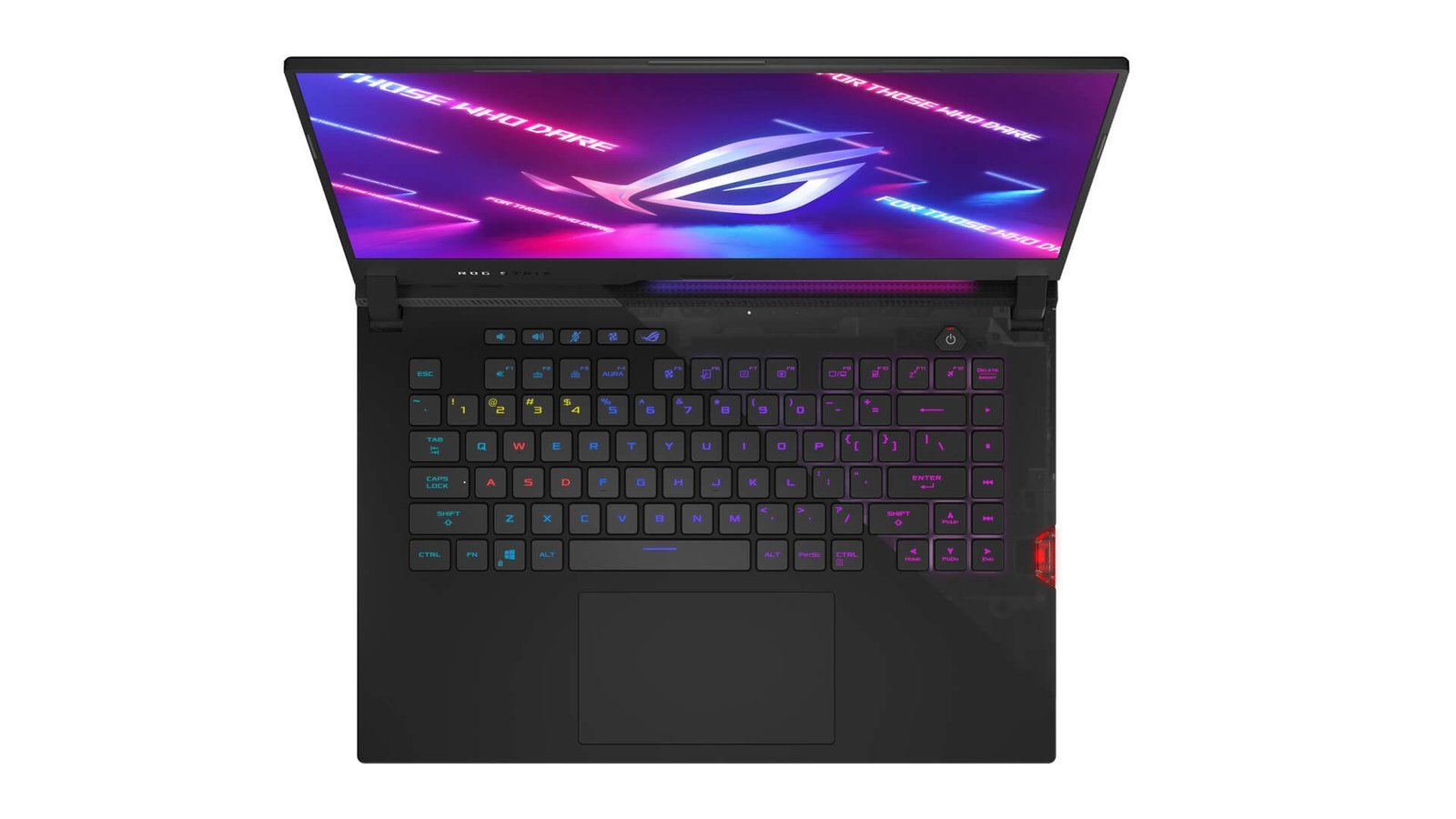 Each key has a long 1.9mm travel distance to improve the overall feel, while the caps have a slight curve that keeps users’ fingers centered. The layout is inspired by desktop keyboards and includes dedicated hotkeys that put vital volume, microphone mute, and other controls within easy reach. ROG’s CoolZone technology strategically places vents around the WASD keys, keeping users’ fingers cool and lowering surface temperatures by up to 14% compared to other laptops.

The new Strix laptops also introduce an improved touchpad, with an active area 85% larger than last year’s and a glass surface with a matte finish, combining smoothness and precision to give users more control. For the SCAR 15 G533, with a tap, the touchpad turns into an illuminated numpad for more intuitive input on 15.6” models that are too narrow to fit a dedicated numpad.

Enhanced mobility
The 2021 Strix SCAR have a footprint up to 7% smaller than last year’s models, making them easier to carry. Their higher-capacity, 90Wh battery also allows for more unplugged time than ever: up to 12 hours of video playback.

Mobility is further enhanced by fast charging support, which allows the battery to reach 50% in only 33 minutes. Fast charging is also supported over USB Type-C with compatible 100W adapters and power banks. Support for Type-C charging is new for the Strix series this year, giving users more flexibility on the road.

The compact chassis has a footprint up to 7% smaller than last year’s models, in part due to thinner bezels. At only 4.5mm along the top and sides, the slimmer frame increases the screen-to-body ratio from 80% to as much as 87%, improving portability and putting users closer to the action. On the Strix SCAR series, the aluminum lid is slashed with a shimmering dot matrix design created with precise electroplating. A soft-touch texture makes the palm rests comfortably smooth, and a translucent treatment on the keyboard deck shows the hardware inside. Under the body, larger rubber feet take a cue from running shoes to maximize stability and grip. Customizable Armor Caps add a new level of personalization, allowing users modify the chassis itself. The laptops come with Rubber Grey, Translucent Black, and Spangle Silver hinge caps that can be quickly swapped. ROG also provides the 3D printer source file to let users create completely custom caps.

RGB illumination has been refined with a higher-density light bar that glows around the front edge of the new Strix chassis. In the SCAR, it complements a new companion strip under the screen and a glowing ROG logo on the lid. The keyboard also features per-key control that lets users highlight critical commands for different games. All the RGB accents are fully customizable, and Aura Sync makes it easy to synchronize colors and effects with compatible peripherals.

ROG’s unique Keystone II technology is back in the new Strix SCAR family. This physical key docks into the side of the chassis and triggers a new sound and keyboard animation. It can perform a range of functions, from launching different games and operating modes to restoring preferences associated with the user’s ROG ID. It can even be configured to unlock a secret Shadow Drive.

Despite being more compact than ever, the new Strix series has a full assortment of ports laid out strategically for a tidy gaming setup. There are enough ports at the back to power a multi-monitor desktop with all cables out of the way, including the main power jack, HDMI, Gigabit Ethernet, USB Type-A, and DisplayPort™-enabled USB Type-C. Two more USB ports sit on the left side along with an audio jack, keeping additional cables from interfering with right-handed mousing. Wi-Fi 6 networking supports peak wireless interface bandwidth up to 2.4Gbps on compatible networks, plus smarter traffic management that enables lower latency through higher efficiency.

ROG Arc Flow fans improve airflow by up to 35% for the CPU and 21% for the GPU with no increase in noise. The new design spins 84 blades capped by special tips that follow an aerodynamic wave pattern that reduces turbulence. The blades each taper down to just 0.2mm at the base to move more air, and they’re made of a liquid-crystal polymer strong enough to maintain its structure at high speeds.

To further amplify airflow, the new Strix series uses an improved self-cleaning cooling system. Dust accumulation on the heatsinks and fans slowly compromises cooling, so particles are channeled out of the chassis to ensure reliable performance over time. Shorter anti-dust tunnels in the latest models clear the way for 15% more airflow while still preventing harmful buildup.

Cooling and performance can be customized with Scenario Profiles. Performance and Turbo modes provide higher performance for demanding esports titles, while Silent mode lowers noise levels for lighter workloads. With 0dB Technology, the fans switch off completely when CPU and GPU temperatures drop below 60°C in Silent mode. This makes cooling truly silent under light workloads.

Scenario Profiles can change other system settings, like disabling the Windows key and switching RGB lighting effects. Users can also switch operating modes on the fly with a convenient keyboard shortcut.

To make team communication clearer, Two-Way AI Noise Cancelation in the new Strix SCAR and Strix G series eliminates up to 95% of background noise from both input and output audio. Developed using a deep neural network for super-high accuracy, this algorithm can be applied to any mic and configured on a per-app basis, so users can target chat software while preserving in-game sound. The two-way filtering processes output audio, allowing users to hear their teammates better. And because noise canceling runs on the CPU, the GPU is free to hit higher FPS. 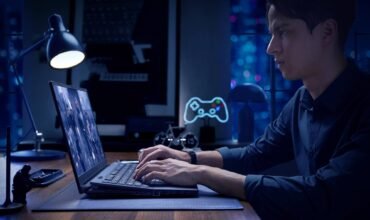 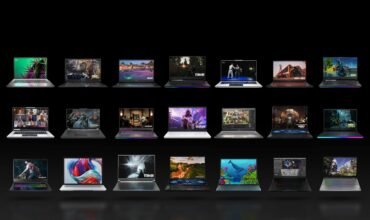