The importance of video conferencing devices has increased ever since the pandemic. Brands such as Poly offers products that are tuned to enhance the virtual meeting experience for both small and large offices. We take a look at the portable and personalized speaker called Poly Sync 20+ Bluetooth speaker, designed for both entertainment and office applications. 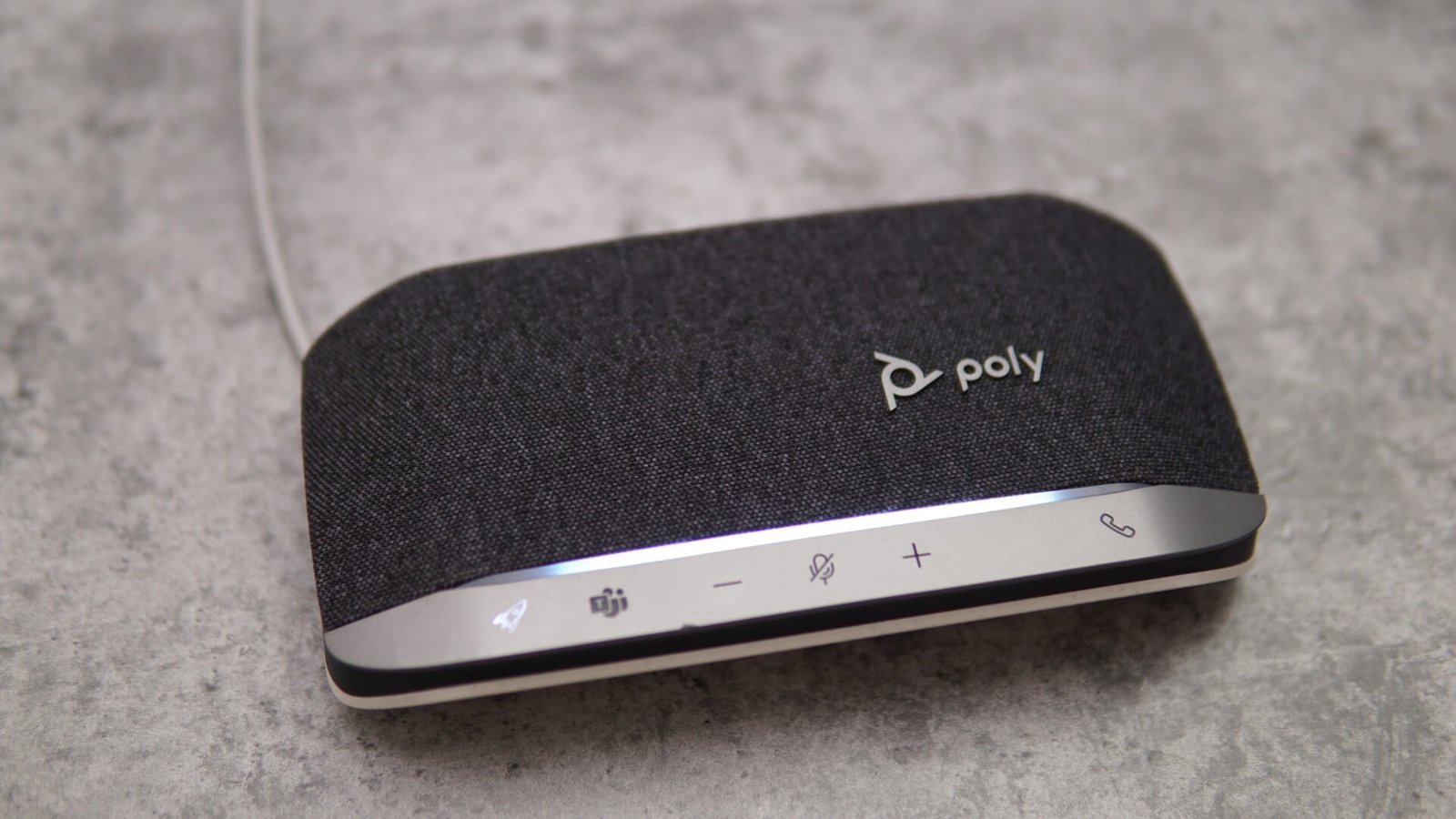 Portable speaker systems usually feature a stylish and lightweight design that is easy to carry around. Some models feature a cylindrical design while others come as a boxy structure. The Poly Sync 20+ comes with a slim and sleek-looking design with some modern aesthetics. The majority of the top section is covered with a soft speaker mesh material with the Bass Reflex System and the multi-microphones underneath. There is the Poly branding located on the right side of the speaker mesh surface. The device also features touch-sensitive user control buttons that are accessible on the side that can be easily distinguished from the silver portion. From the left, you get the programmable button, the Microsoft Teams button, the volume buttons with minus and plus symbols, and the phone call function. The rocket icon is the programmable button that we mentioned about and it lets users assign their favorite quick functions such as play/pause, redialing the last number, activating the voice assistant, and so forth.

We should also mention that the speaker has a light bar that sits between the touch-sensitive control portion and the speaker mesh. The light bar shows different colors based on what you do with the speaker. For example, the light bar glows in green when a call is going on, red when the battery is low, and white when it’s on stand-by. The light bar is very visible even when you are standing further away from the speaker.

The device also has a USB Type-A port on the right side, along with buttons for power and Bluetooth. The USB Type-A port is used to connect to a smartphone for charging purposes. On the left is a slot for Kensington locks. The Poly Sync 20+ features a dimension of 34 mm x 95 mm x 182 mm and the device weighs hardly 360g, which makes it very portable to carry around. There is also a USB cable that is attached to the speaker with a total length of 715mm. While the cable cannot be detached, the bottom side of the speaker system is designed in such a way that it can be used to wind up and hide the cable when not in use. The layer underneath features a warm white color with dot-like textures as part of the design. Poly also included a soft carry case to easily carry the Poly Sync 20+ speaker system. The color of the carry case resembles that of the speaker mesh surface. The Poly Sync 20+ isn’t like any of the standard portable Bluetooth speakers you are familiar with. Most laptops or smartphones don’t usually deliver the same level of sound as you would hear from a dedicated audio system. The Poly speakerphone is tuned to provide enhanced audio for both online meetings as well as for entertainment.

When it comes to online meetings, users will be able to take advantage of the triple microphone arrays that pick up the best of your voice and the range is up to 2 meters of distance. This matters a lot when you are the presenter of a meeting and want to walk around while explaining a topic to other members. The microphone system has a frequency response from 100Hz to 6.7kHz. And if you are worried about the outside noise that causes distractions, the Poly Sync 20+ comes with its own noise and echo reduction that helps to filter out other unwanted noise so the participants of the meeting can only hear your voice. This is a crucial feature wanted by many users.

The main audio system of the speaker consists of a single 40mm high-performance loudspeaker, featuring a frequency response that ranges between 80 Hz and 20 kHz. This covers most of the highs and lows of an audio stream or a music track. The peak audio output of the music speaker is rated at 86dBspl @ 0.5m. The full-duplex audio system also features a bass reflex with dual passive radiators that help to produce clean bass effects while you watch a movie or hear your favorite tunes.

The speaker can be connected wirelessly, thanks to the implementation of Bluetooth 5.1, and has support for profiles such as A2DP, AVRCP, HFP, HSP, and BLE. There is a dedicated Bluetooth button that can be used to sync with your laptop or smartphone. Users will also be able to connect the speaker to a laptop using the attached USB wire. The speaker automatically accepts audio from the laptop if a video or audio is being played. 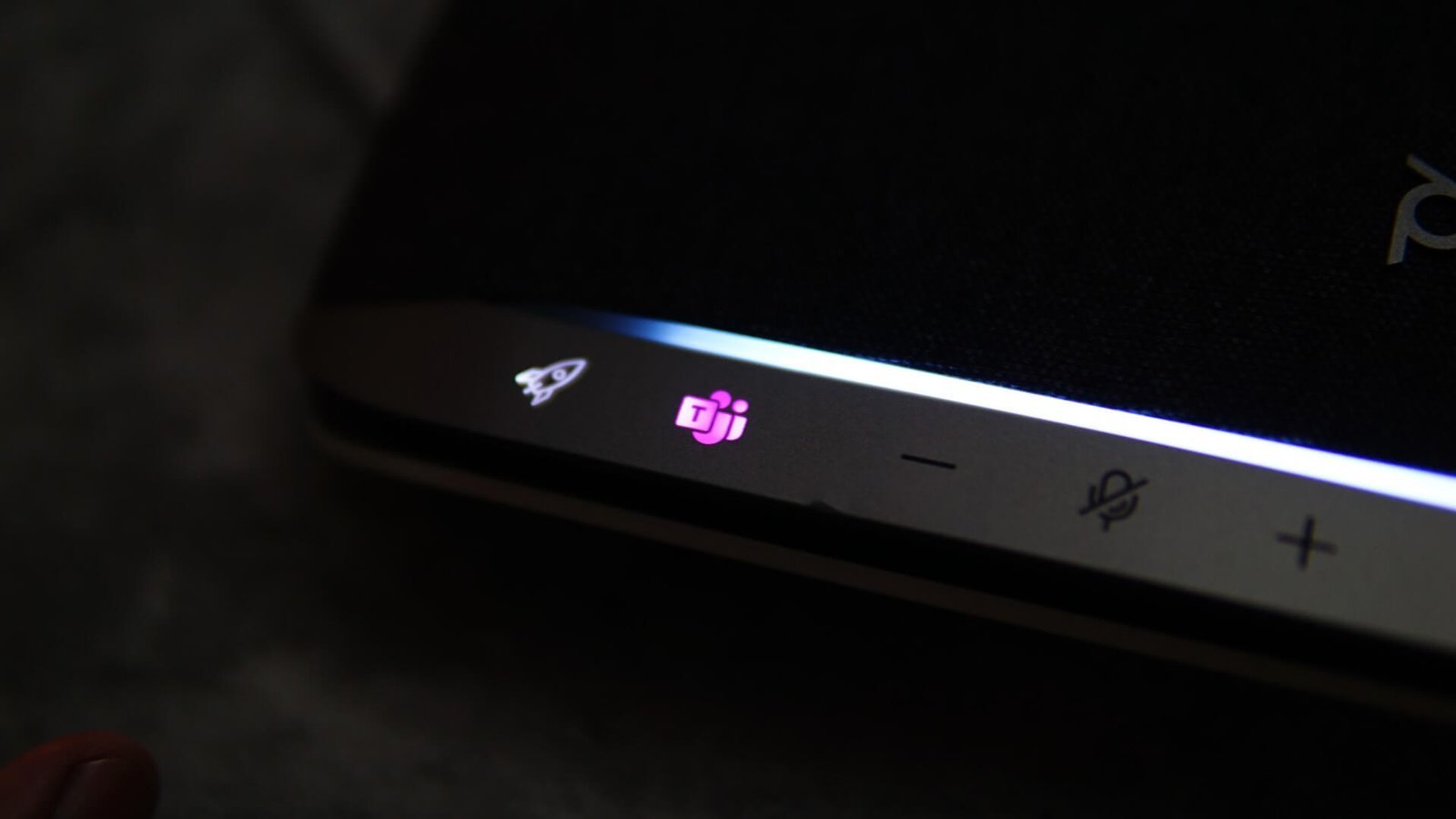 And in case your laptop does not feature Bluetooth connectivity, the Poly Sync 20+ comes with a BT600 Bluetooth adaptor. The adapter has its own LED that lights up when connected. The device also has its own audible feature that tells when the speaker is connected to a device, battery status, etc. Poly also provides apps for both laptops and smartphone platforms so you can see the status of the speaker and manage the features of the device. You will be able to see the battery status, customize the programmable button, perform firmware updates, and more via the application. While the speaker is tuned for both work and play, there is another important aspect that everyone wants to know regarding a speaker and that is the battery life. The device houses a 3200 mAh Lithium-ion battery that is capable of offering up to 20 hours of playtime. However, the playtime really depends on how you use the speaker. And one of the most interesting features of the speaker is its ability to charge other devices. We had a Samsung Galaxy Fold3 smartphone for review at the time of testing the Sync 20+, and the speaker was able to charge about 40 percent of the smartphone battery. We were able to charge the smartphone via a USB Type-C cable and its opposite end connected to the USB Type-A port of the speaker. Once the smartphone reached 40 percent charge, the speaker was completely drained out. (Don’t mind the image above that says 70 percent as the picture was captured at a different time to represent a speaker to smartphone connection). That said, the speaker was able to last for half a day of use more when using it for ZOOM meetings, watching Youtube clips, and more. Poly mentions that the speaker takes about four hours to charge from zero to 100 percent.

The Poly Sync 20+ is a fully-featured portable Bluetooth speaker system tuned to offer better audio experiences for users in corporate offices that deal with online video conferences on a daily basis. And it’s also a great speaker for entertainment. It’s based on a slim and lightweight design that is easy to carry around if you are someone that travels between offices for meetings and is a great companion for your laptop. The device can be connected to your laptop via wireless connectivity or with the included cable. 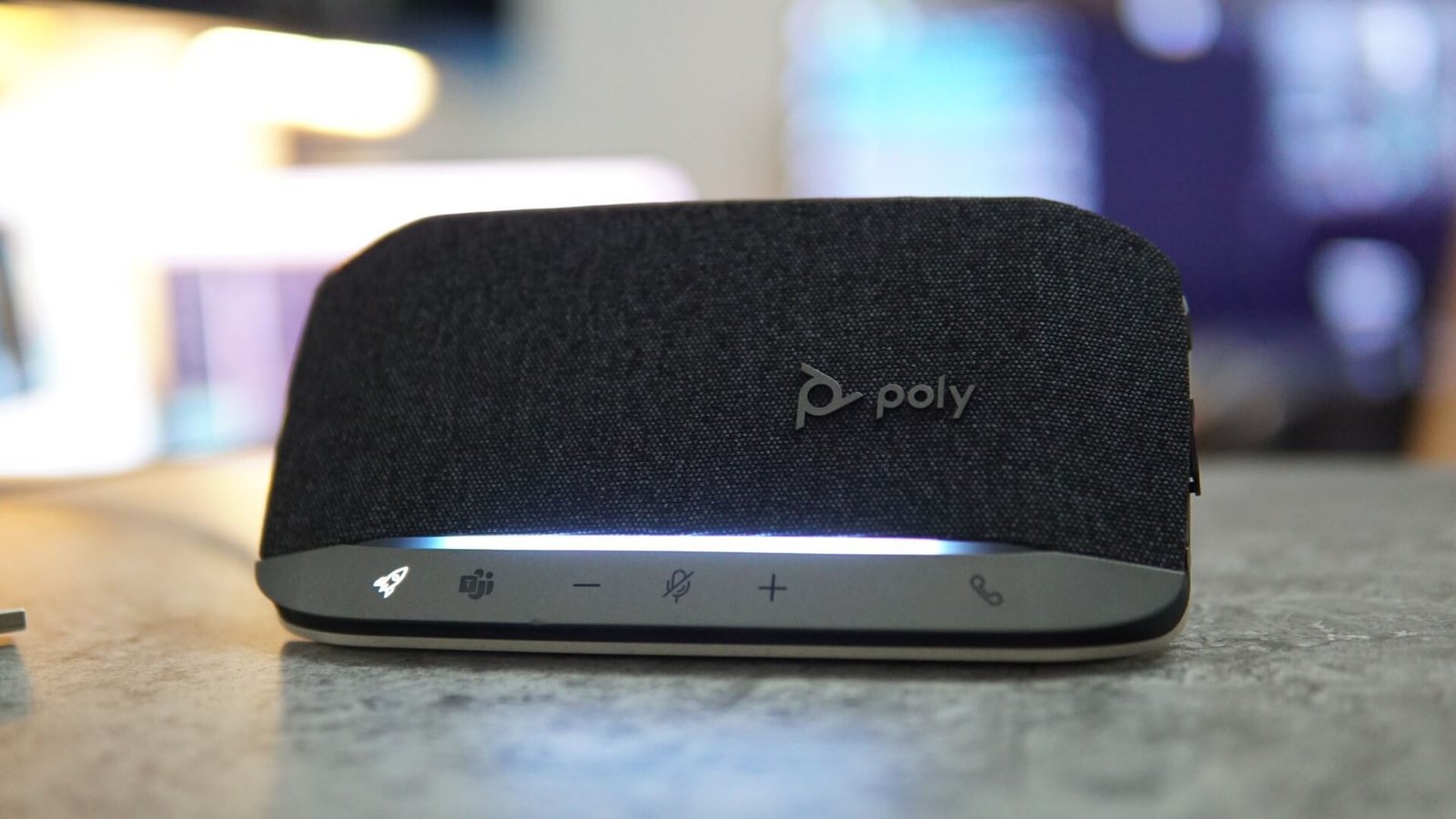 And if you happen to leave your laptop back at home or in your car, the speaker can sync with your smartphone for online meetings via Bluetooth. The Microsoft Teams version offers seamless sync with the Teams app that is installed on your laptop. The battery life will last you for a day of use and the speaker is also able to charge other devices such as smartphones. Poly also offers firmware updates to improve the performance and stability of the speaker, along with new features that can be added to enhance your productivity and entertainment. 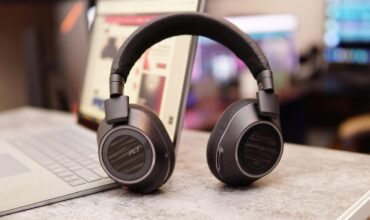 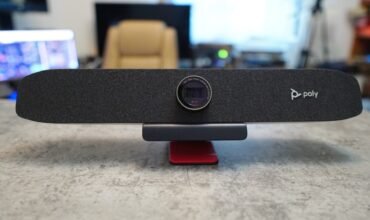 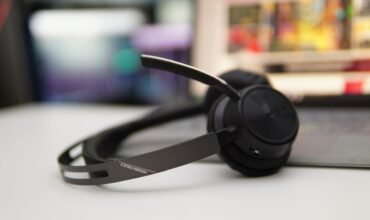