With most brands now entering the foldable smartphone category, Samsung has already released the fourth iteration of its Z Fold series devices. We take a look at the new Samsung Galaxy Z Fold4 smartphone and here are our thoughts about the device.

When compared to the previous versions, Samsung has designed the Fold4 to be more streamlined and durable. The Fold4 is also slightly thinner and lighter than the Fold3 and weighs only 263g. In its unfolded state, the device is only 6.3mm thick. And in its folded state, the device thickness is between 14.2mm and 15.8 mm. The main foldable display is a 7.6-inch Dynamic AMOLED 2X panel with a smooth 120Hz refresh rate and 1200nits of peak brightness. The screen resolution is also slightly improved and is rated at 1812 x 2176 pixels. 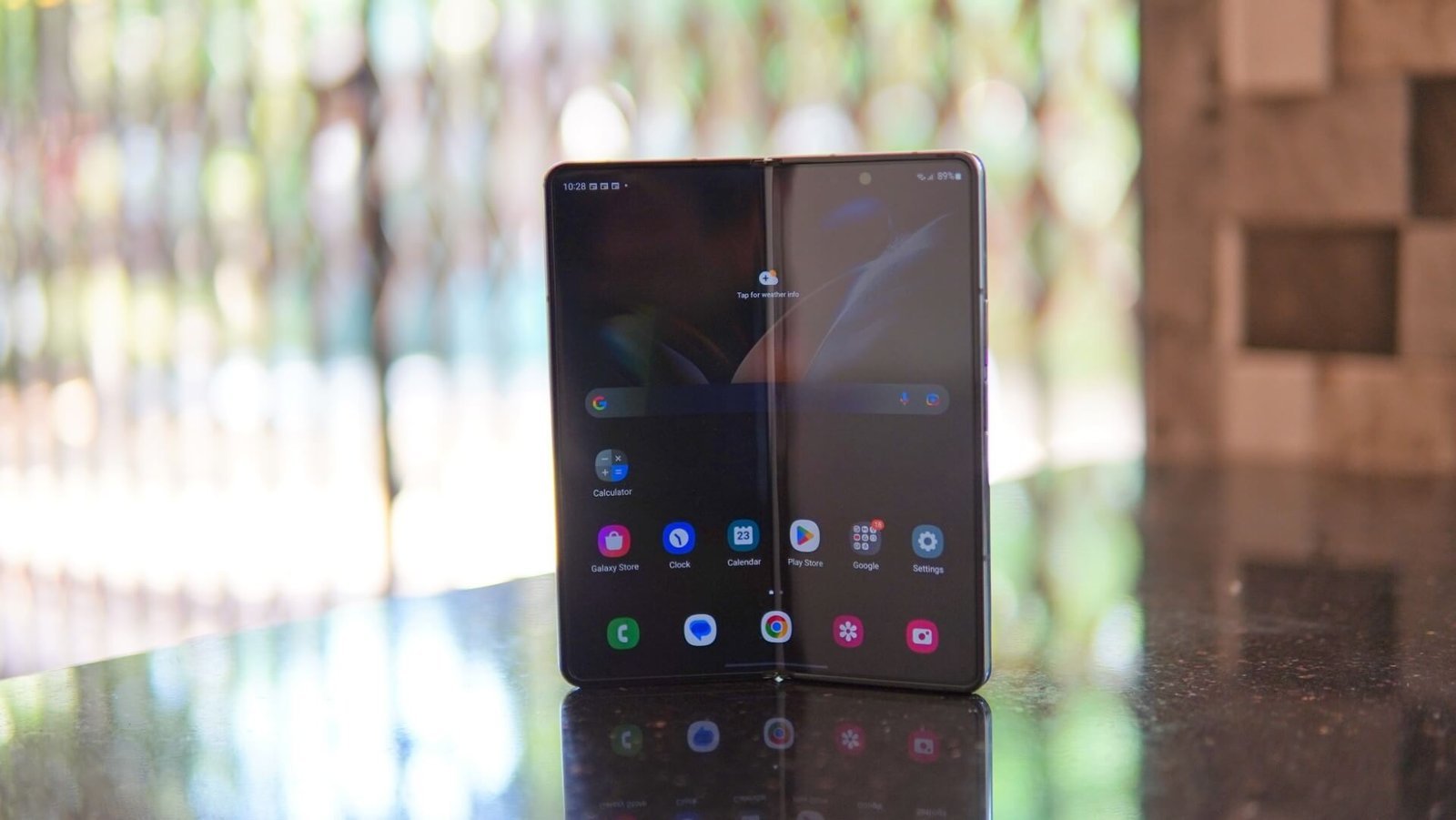 The front-facing cover display is a 6.2-inch Dynamic AMOLED 2X that also features a 120Hz refresh rate. The display resolution is 904 x 2316 pixels and the display ratio is 23:1:9. While the Fold3’s front screen was a bit narrow to use due to the large hinge, Samsung reduced the size of the hinge and widened the screen estate on the Fold4. And to me, that is a big improvement in terms of design and usage of the cover display, especially for one-handed operations. One of my favorite features of the Fold series smartphone is the transitioning of the content from mobile to tablet mode and vice-versa while browsing webpages, using applications and more. In terms of web browsing, there are some websites you may come across that aren’t really optimized for the screen resolution and aspect ratio of the Fold4’s unfolded state. The texts on web pages appear to be sharp and the image quality is great on both the cover and the unfolded display, thanks to the screen resolution and the colors of an AMOLED panel. One of the most important concerns while using a folding screen is the visibility of the crease. From our time with the smartphone, the crease is very much less noticeable than what we experienced with the Fold3. However, it’s still quite visible when viewing the screen from a particular angle where the light bounces off – for both indoor and outdoor situations. While it didn’t bother us so much, it could be a deal breaker for those who don’t like the crease. 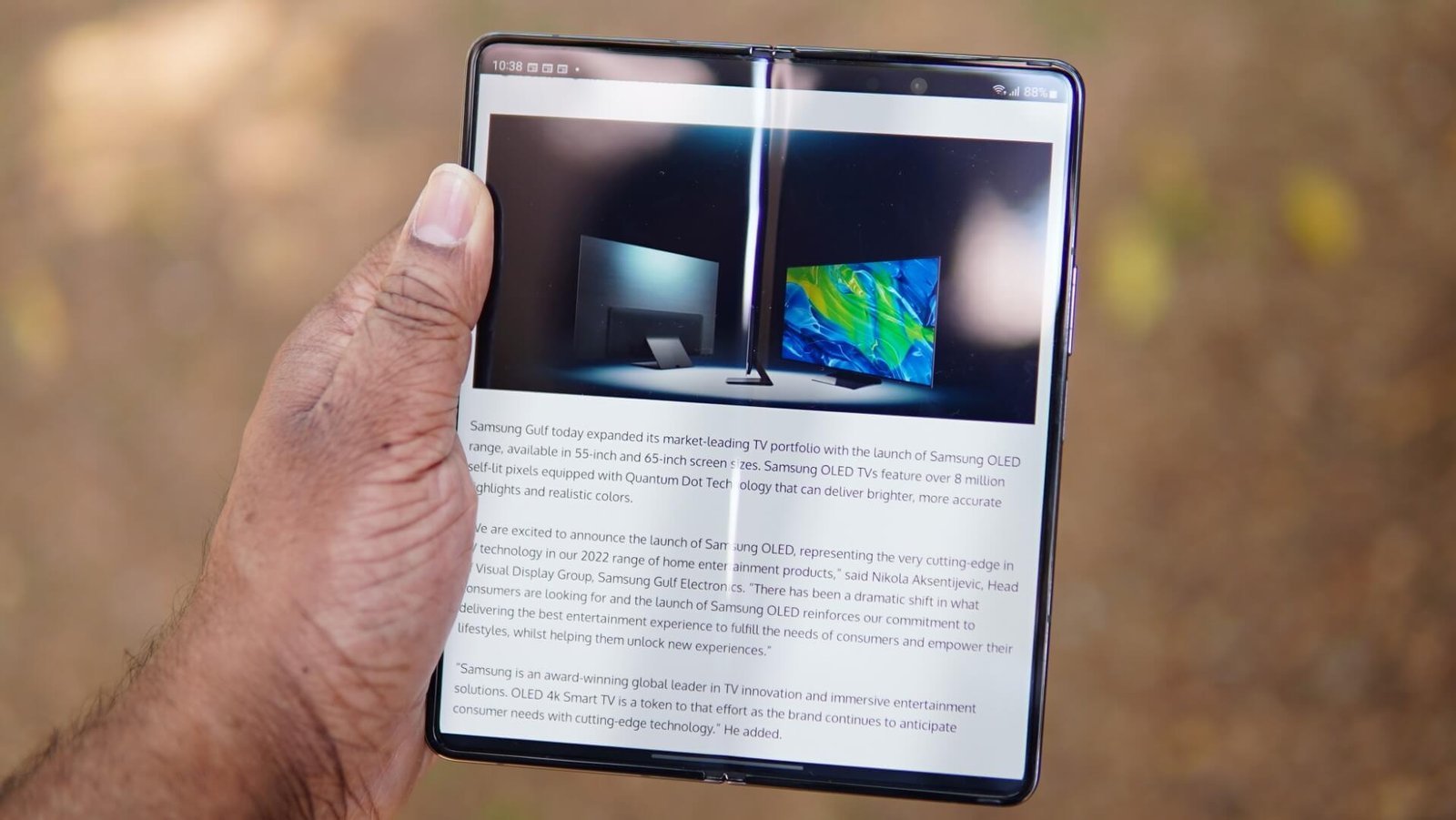 The camera island on the rear side of the device is arranged vertically and protrudes quite a bit outwards. The Fold4 comes in Beige, Grey Green, and Phantom Black colors and our review unit featured the Grey Green color. Samsung says that the hinge of the Fold4 is improved and strengthened by Armor Aluminum for enhanced durability. 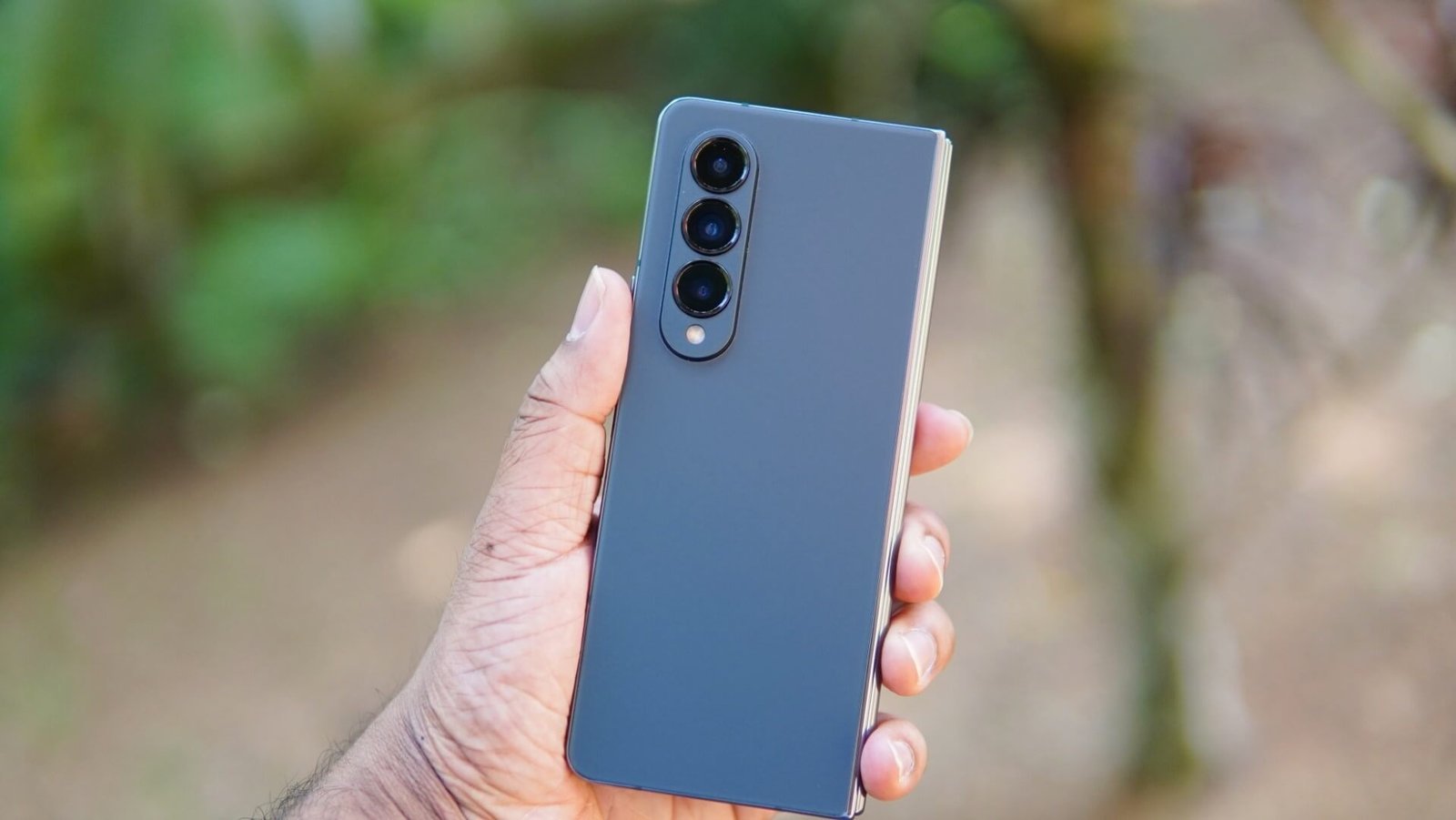 The USB-C port is located at the bottom and the AKG-tuned speaker grills are seen on the top and bottom sides. The volume rocker and the fingerprint scanner are located on the right side of the display and the SIM slot is on the left side. 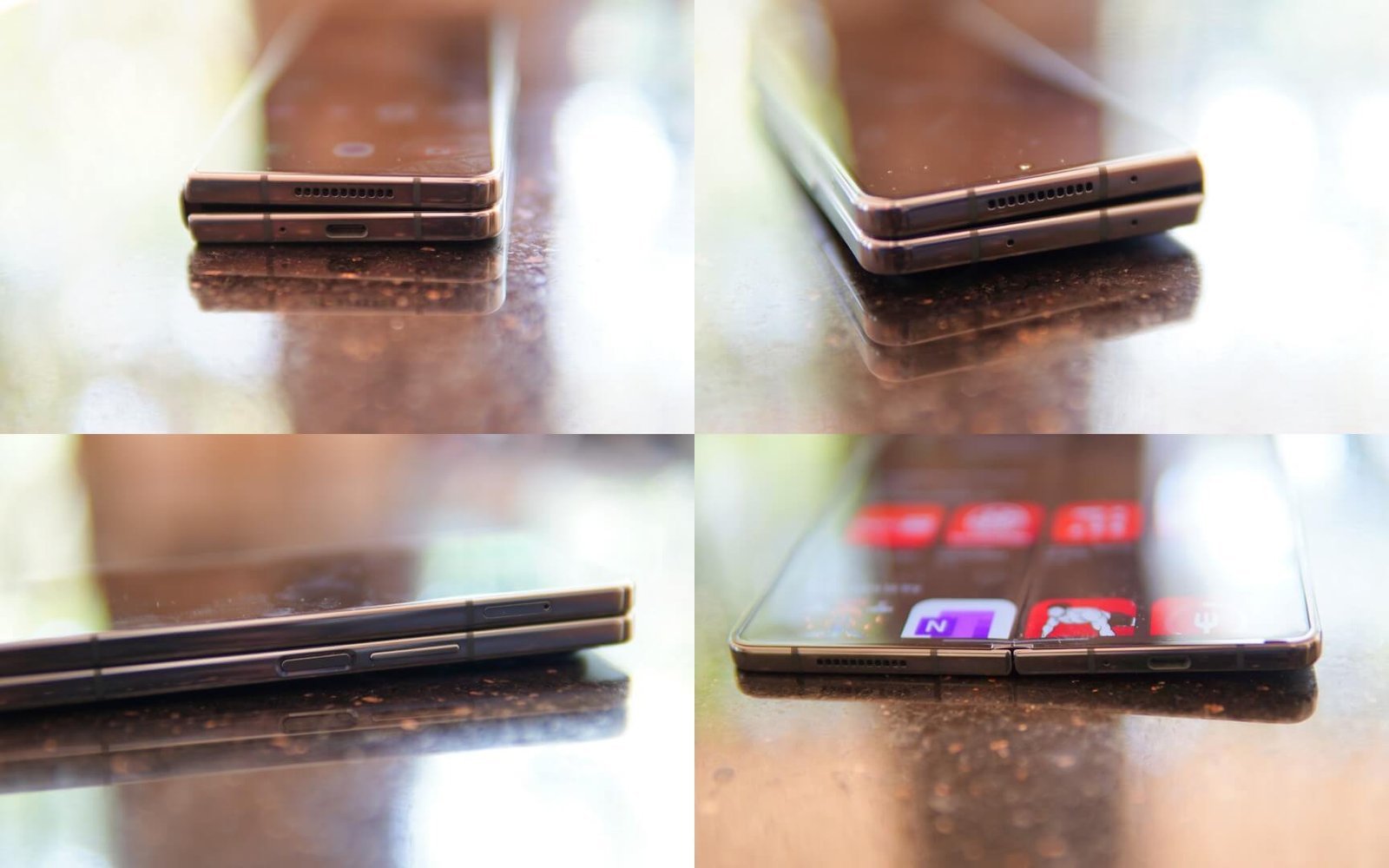 Users will also be able to use Fold4 in a laptop mode where they can view the content on the left half of the screen, while the right side is positioned as a touchscreen keyboard. Similarly, this laptop mode can be done with apps such as YouTube, where the video is played on the upper half, while we can view comments and other recommendations on the other half of the screen. This honestly reminds us of the times when Windows palmtop PCs and Nokia Communicator devices used to be a trend in the market. 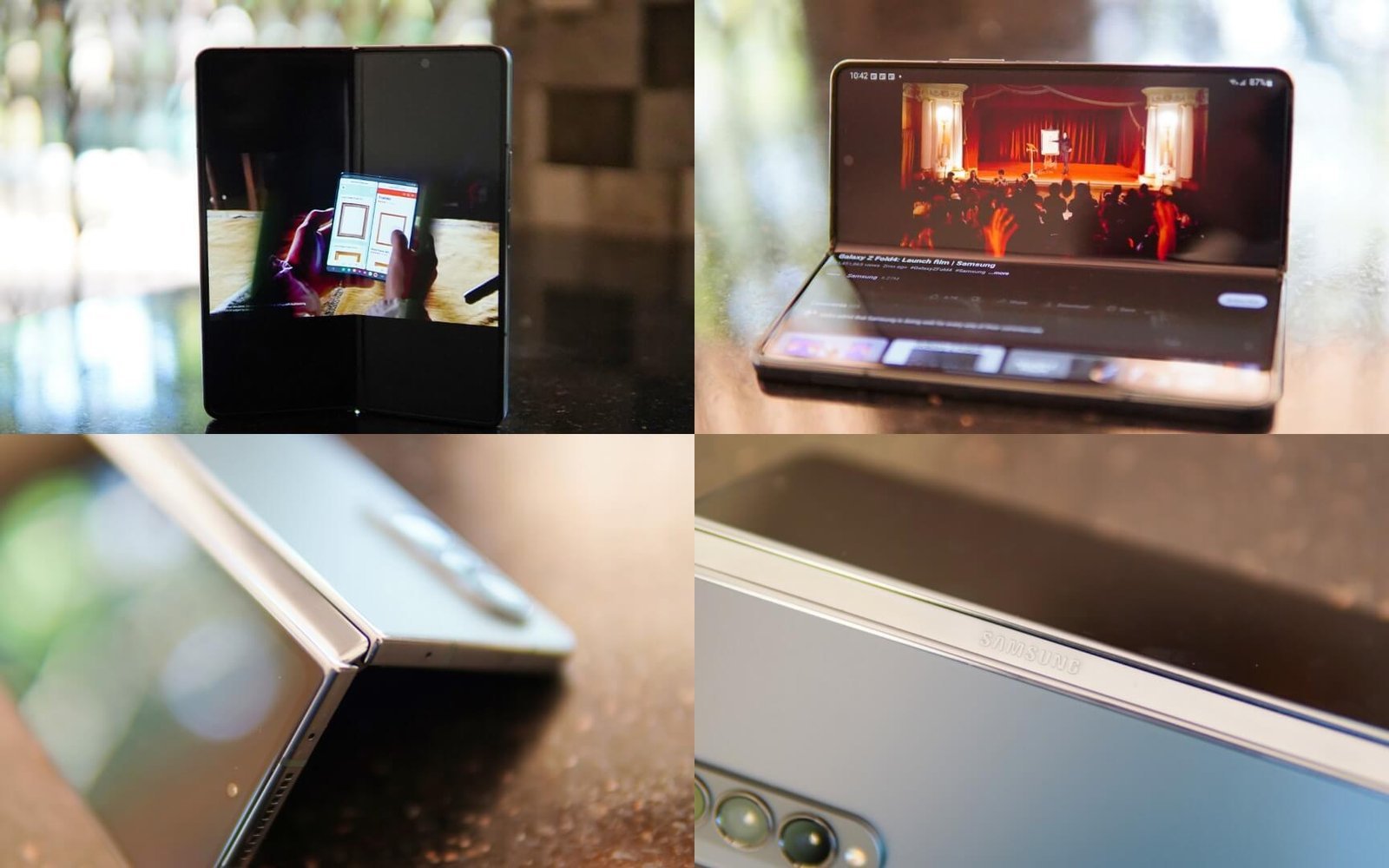 The Galaxy Z Fold4 smartphone also features IPX8 certification that offers water resistance up to 1.5m for a duration of 30 minutes. The display also comes with Corning Gorilla Glass Victus+ for resistance against scratches and bumps.

When it comes to performance, the Fold4 is powered by the Qualcomm Snapdragon 8+ Gen 1 SoC, an octa-core processor with one Cortex X2 clocked at 3.19GHz, three Cortex A710 cores with 2.75 GHz speeds, and four Cortex A510 cores with 1.80 GHz speeds. The SoC also features the Adreno 730 GPU for high-speed mobile gaming and the device comes with 12GB of system RAM. Samsung offers the Fold4 in 256GB, 512GB, and 1TB storage options and the memory used here is UFS 3.1. 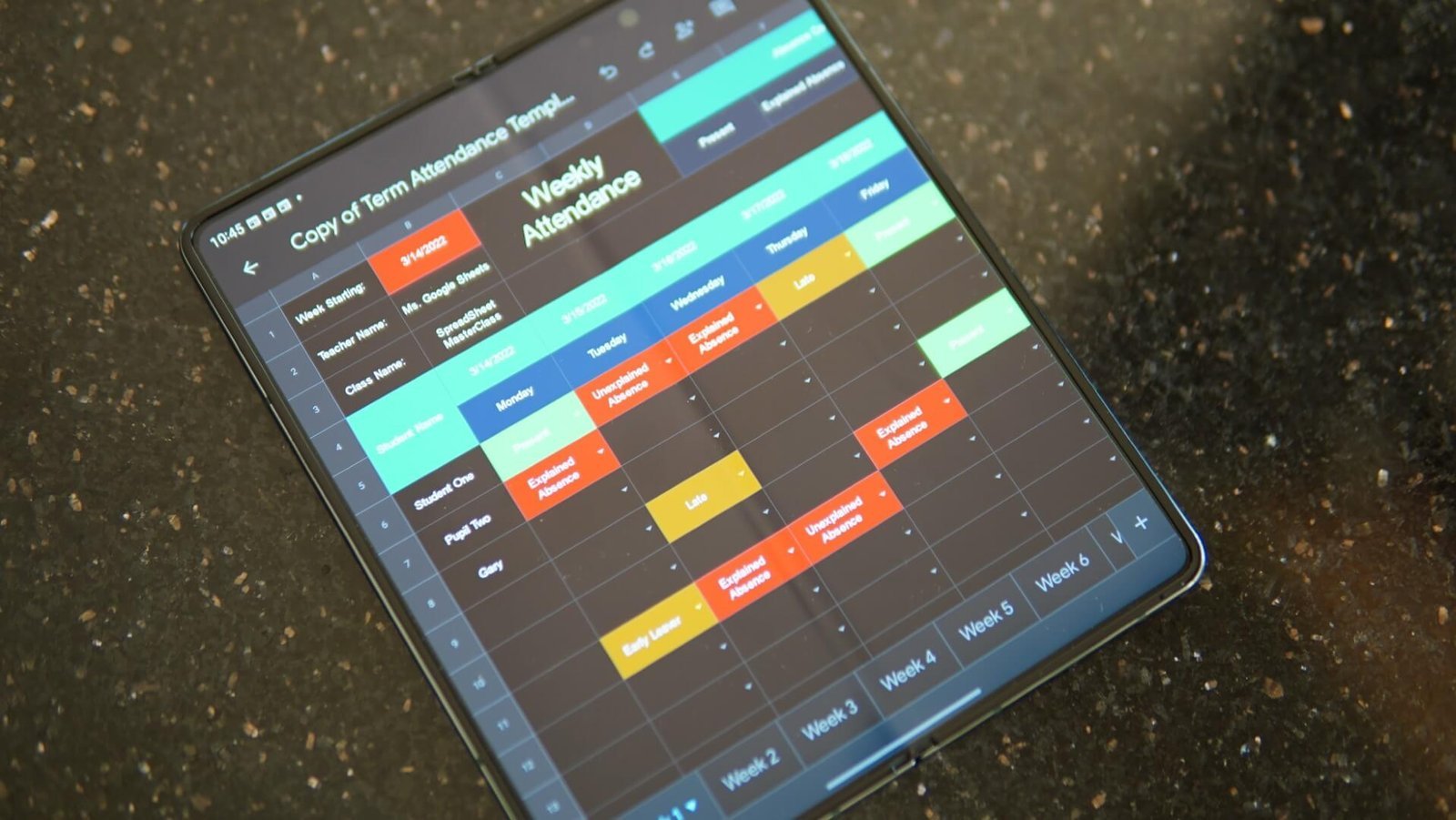 The device also runs on Android 12L OS and is upgradable to the latest Android 13 OS with One UI 5 user interface. The UI is very smooth when scrolling through the menu and switching between applications. Samsung also mentions that the Fold4 is compatible with the latest S-Pen Fold Edition for those who want to get creative and also take multi-tasking to the next level. Speaking of S-Pen, I had the chance to try the S-Pen from an older device such as the Galaxy Note 10, and the Fold4 gave a warning that the S-Pen is incompatible, which is kind of a disappointment.

Other features include Bluetooth 5.2 and 5G connectivity. We ran some benchmarks such as PCMark, 3DMark Wildlife, Geekbench 5, and Antutu. Take a look at the scores below. 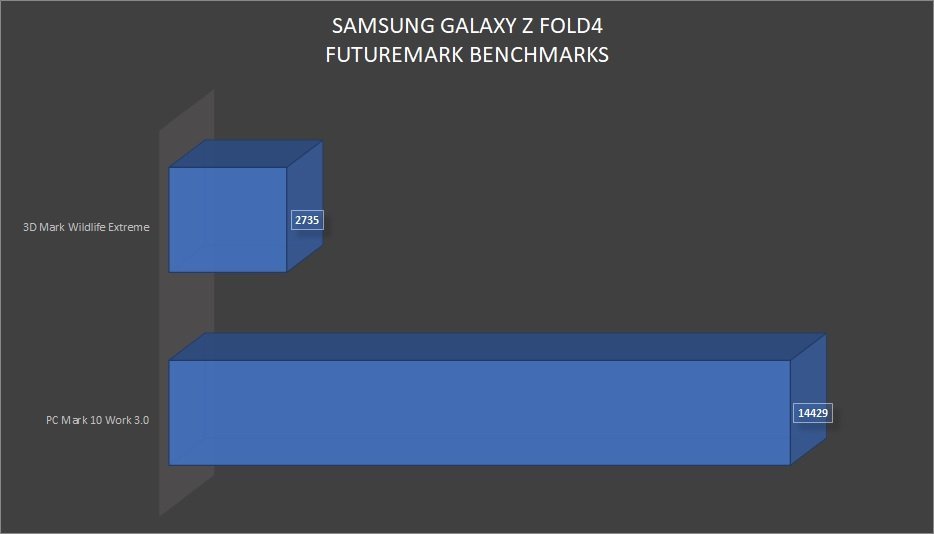 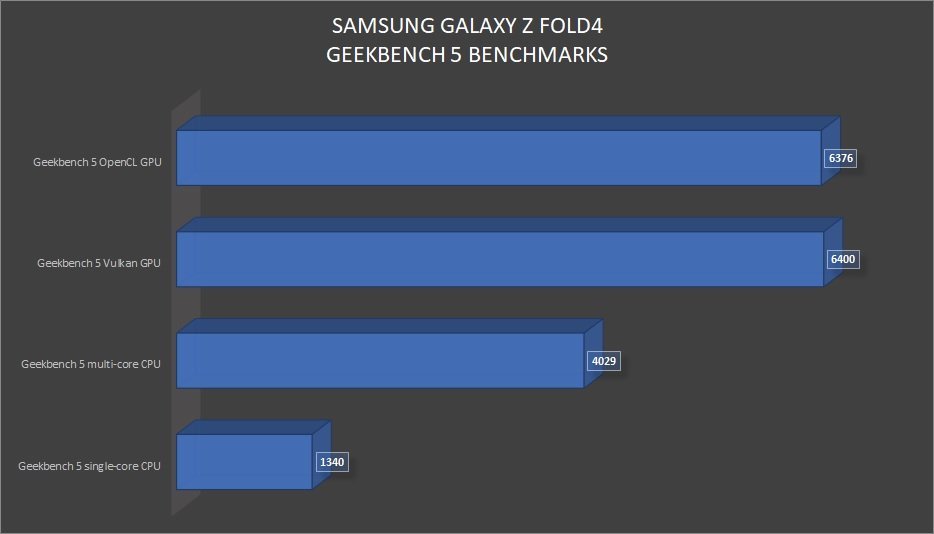 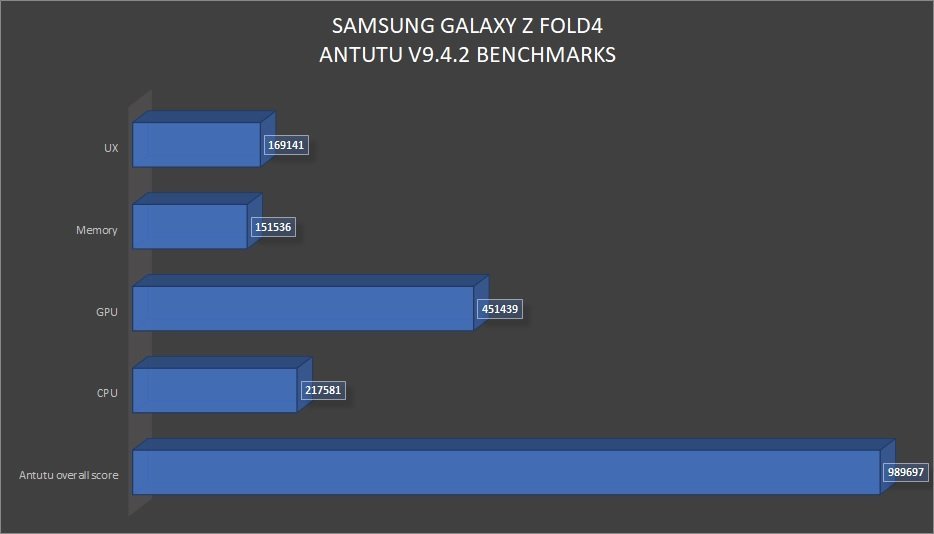 The Galaxy Z Fold4 comes with a total of five camera sensors that include three main shooters on the rear side, one front-facing camera on the cover display, and another selfie camera on the right-sided screen of the unfolded display. The main camera sensors include a 50MP sensor with f/1.8 as the aperture for 23mm wide shots, a 10MP sensor with an f/2.4 lens for telephoto shots, and one 12MP snapper with f/2.2 aperture for ultra-wide shots. The main snapper also comes with Dual Pixel autofocus and optical image stabilization. 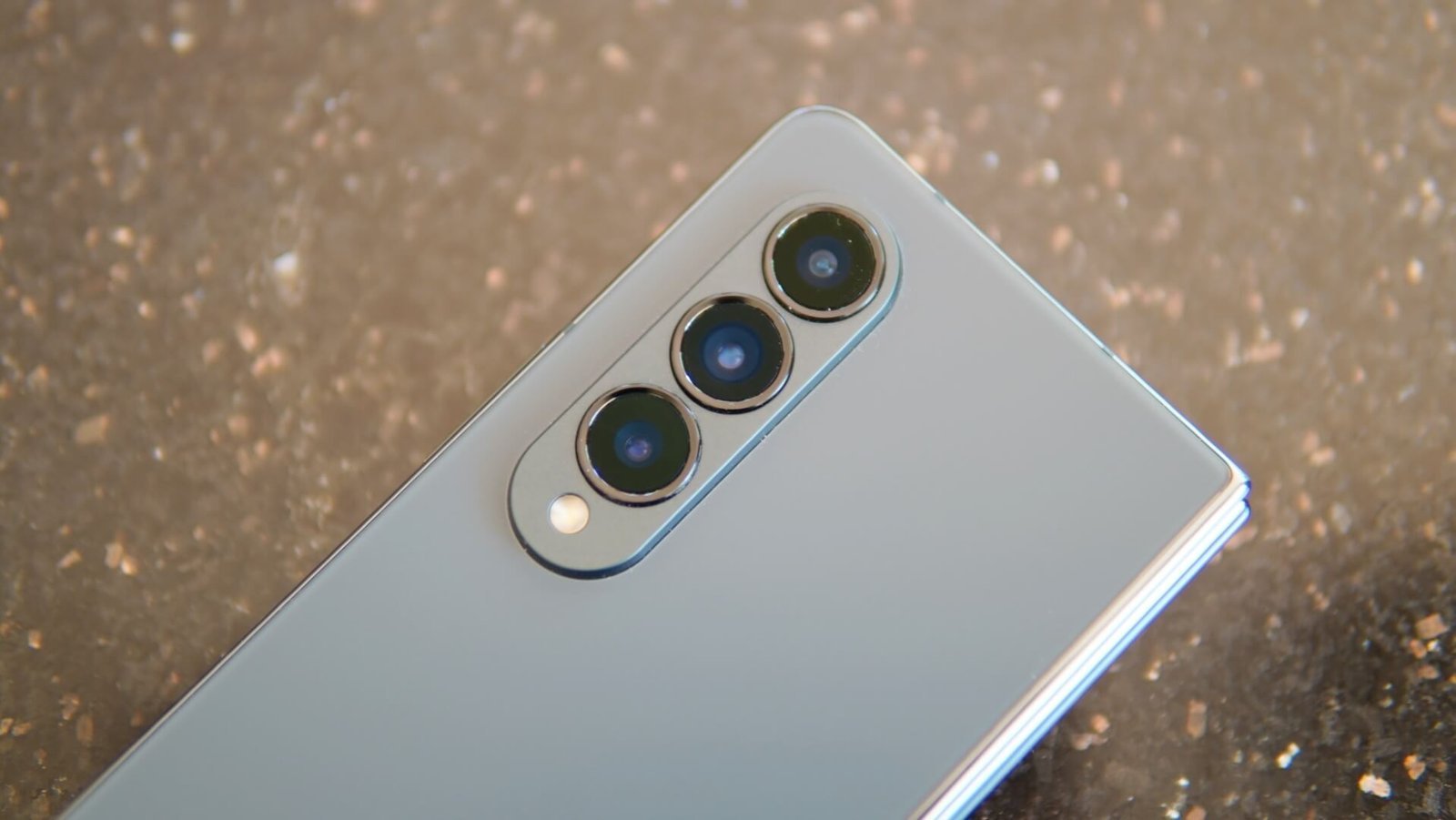 The selfie camera that is located on the unfolded screen is actually constructed under the display and houses a modest 4MP selfie snapper with an f/1.8 lens. The selfie camera on the cover screen is slightly better and features a 10MP snapper. The main cameras are capable of 8K videos at 24fps, 4K videos at 60fps, 1080p videos up to 240fps, and more. Both the front-facing cameras are capable of 4K videos up to 60fps and 1080p videos at 60fps. Take a look at some of the image samples below. 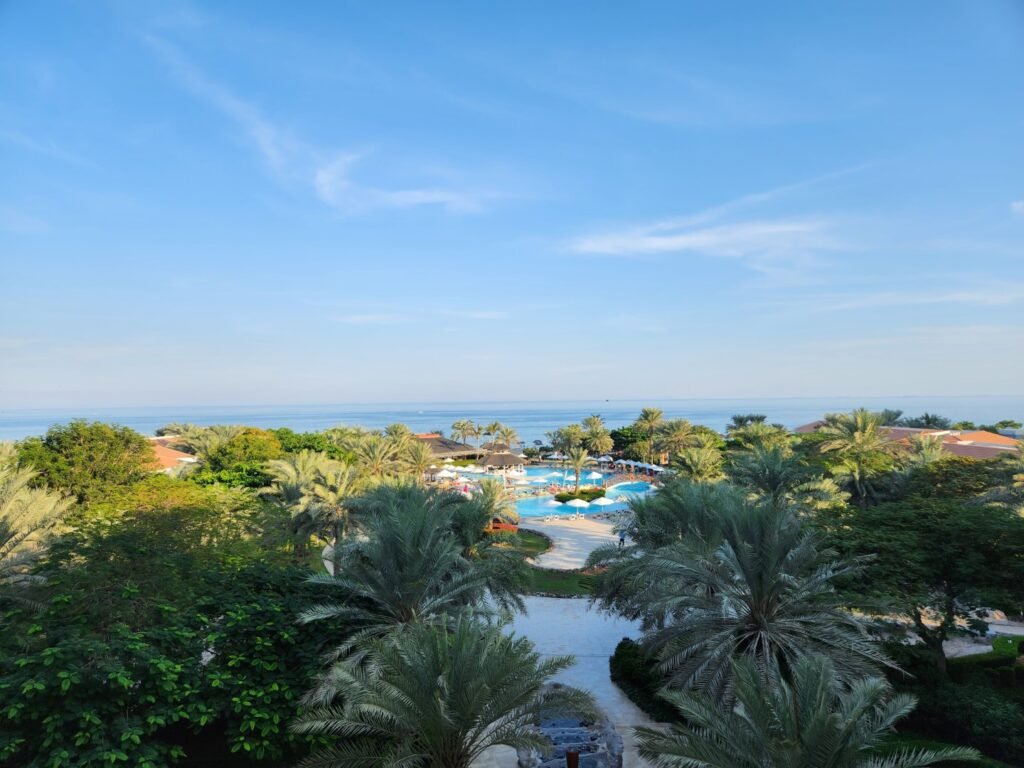 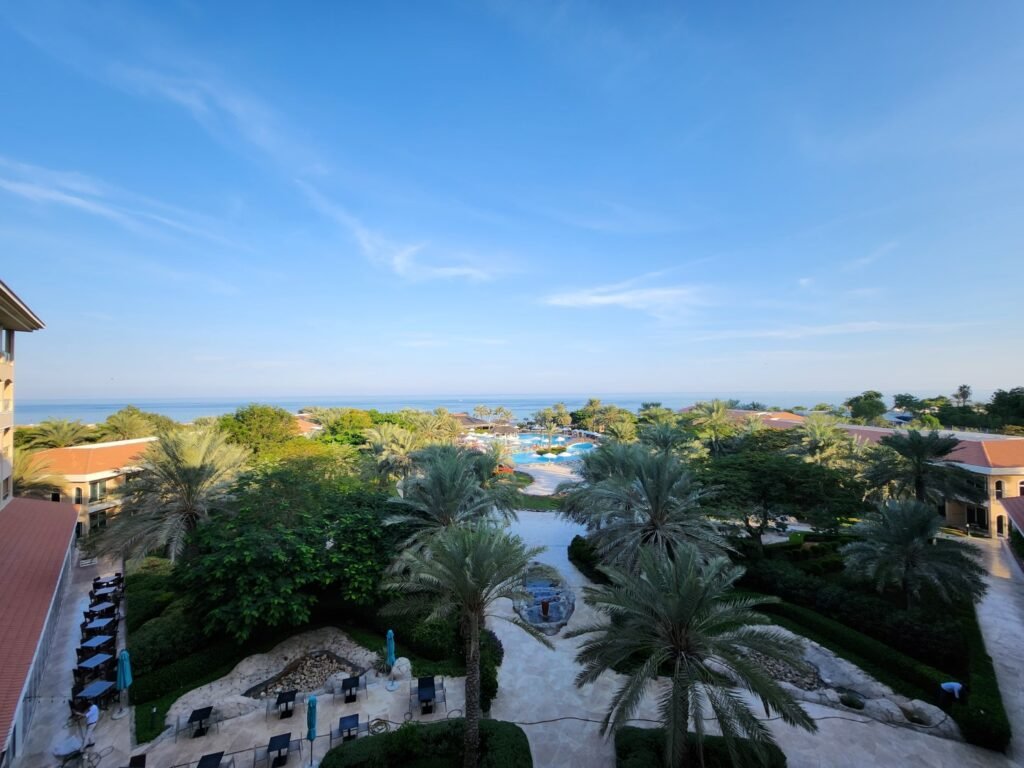 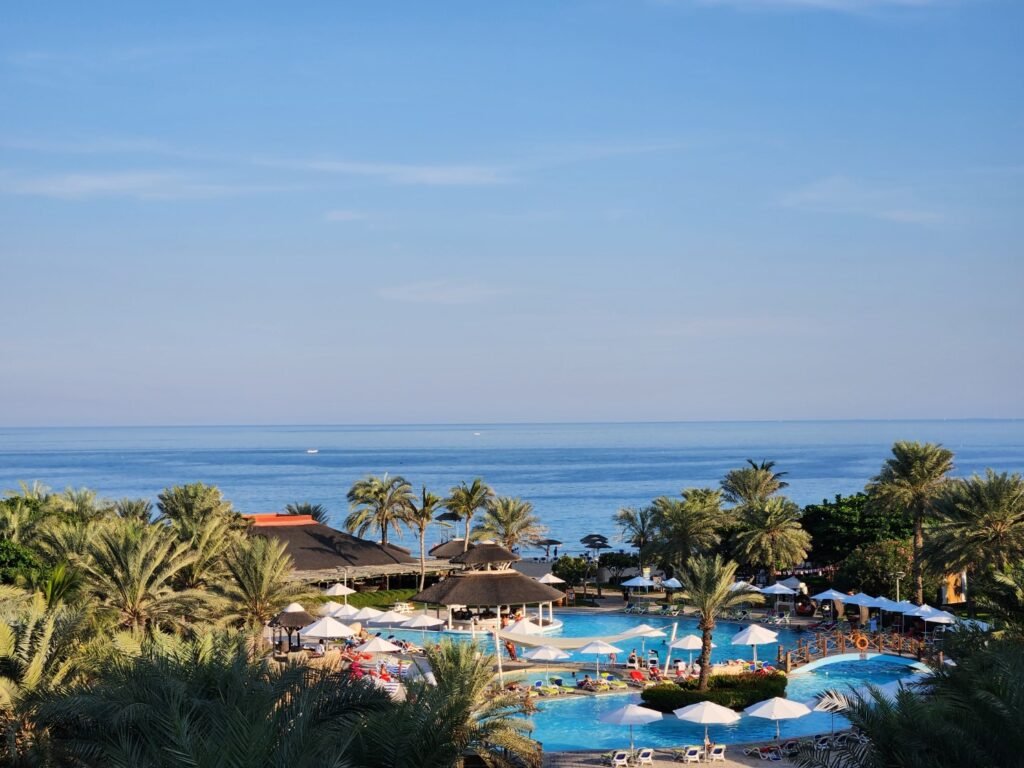 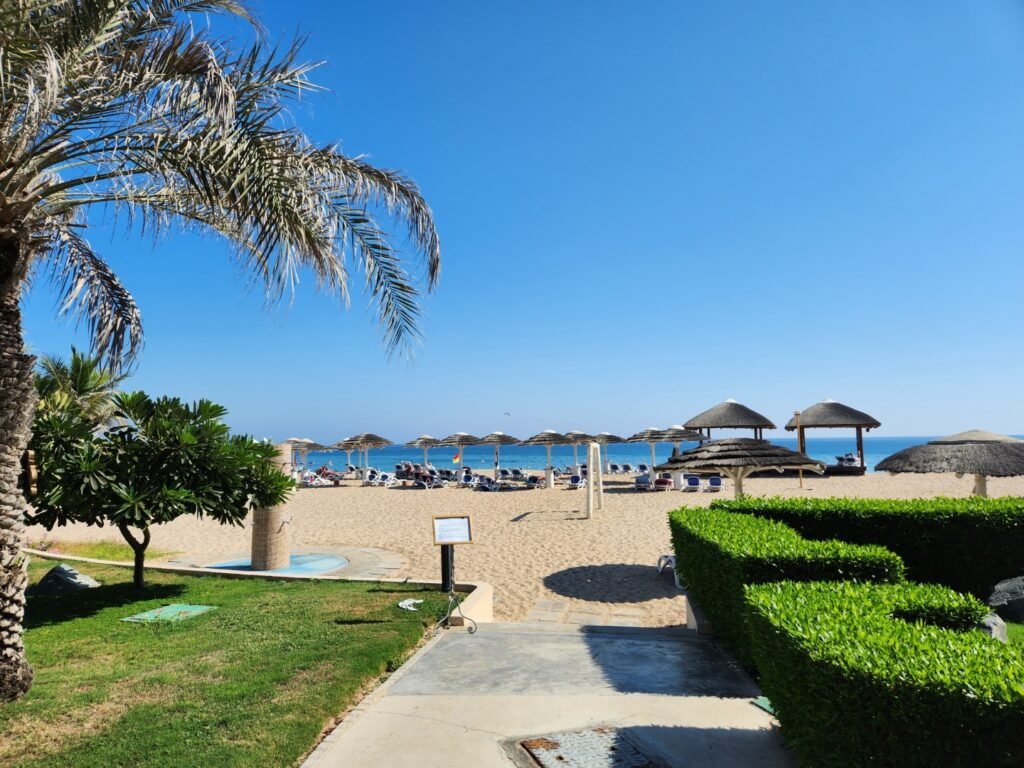 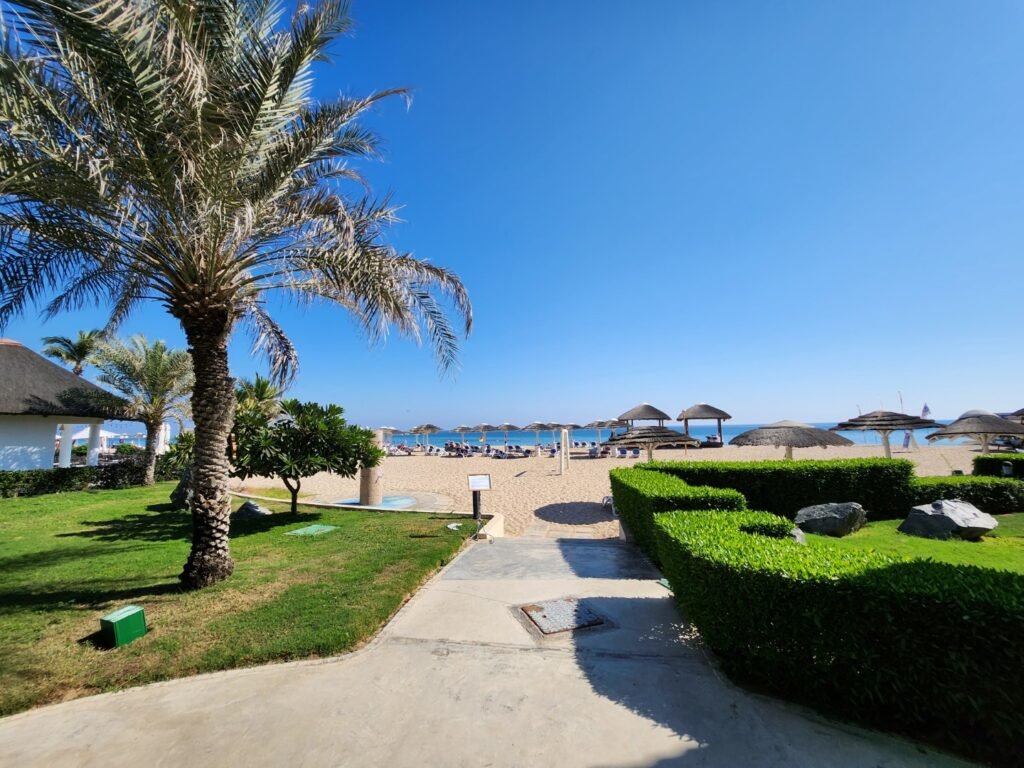 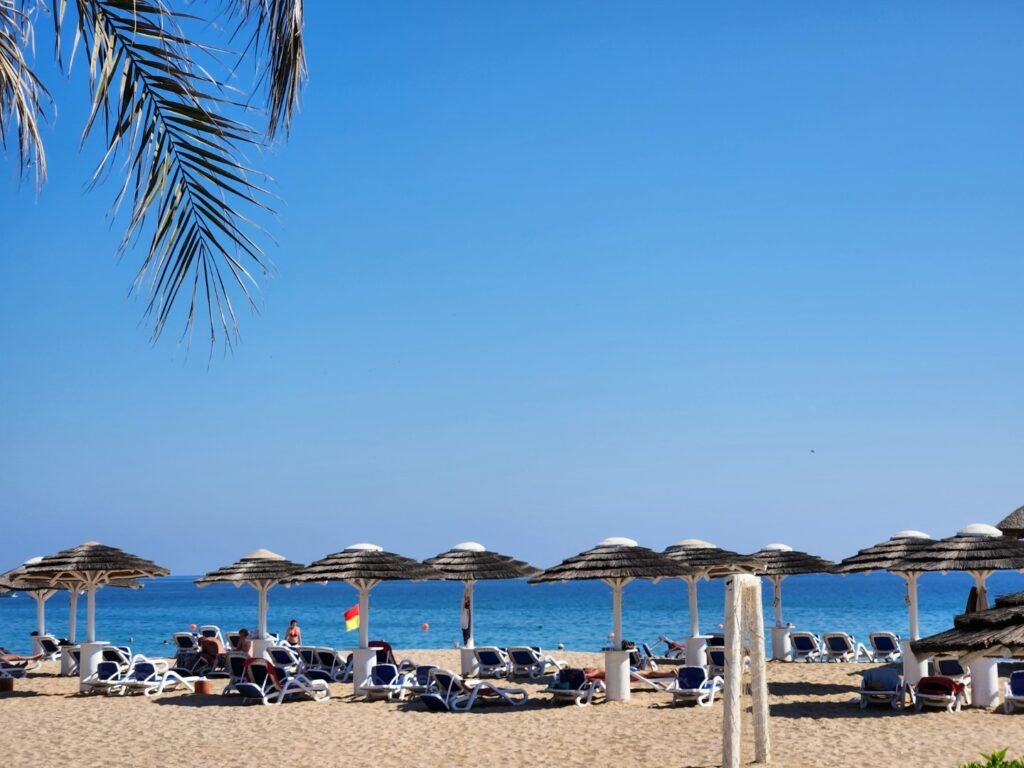 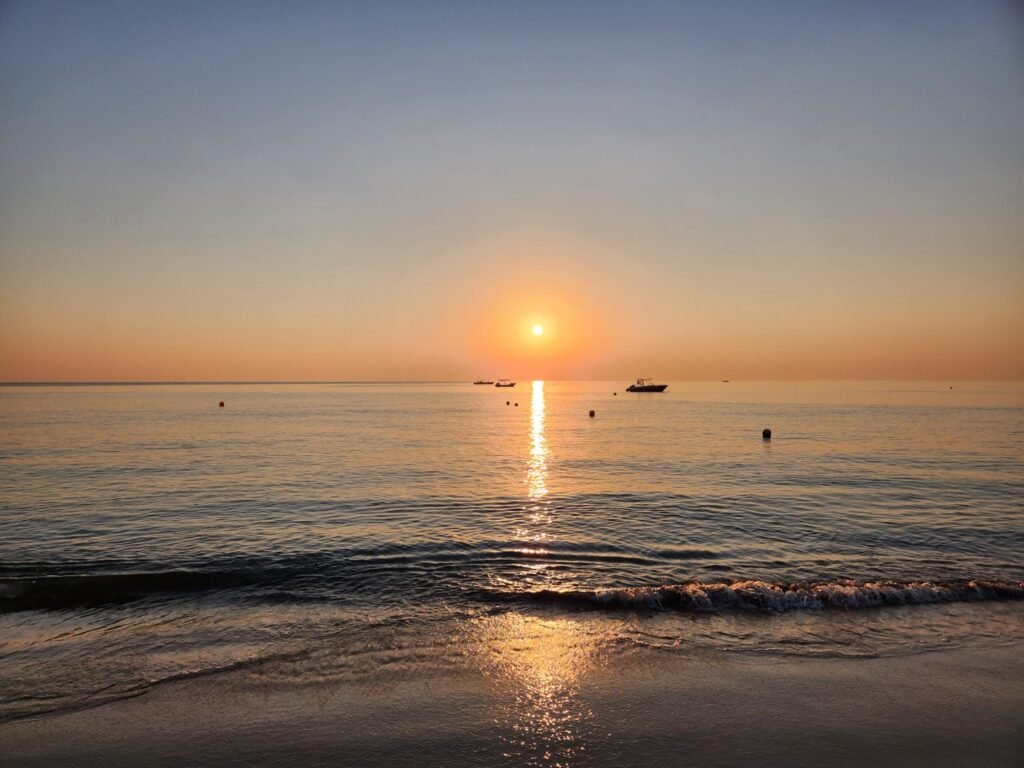 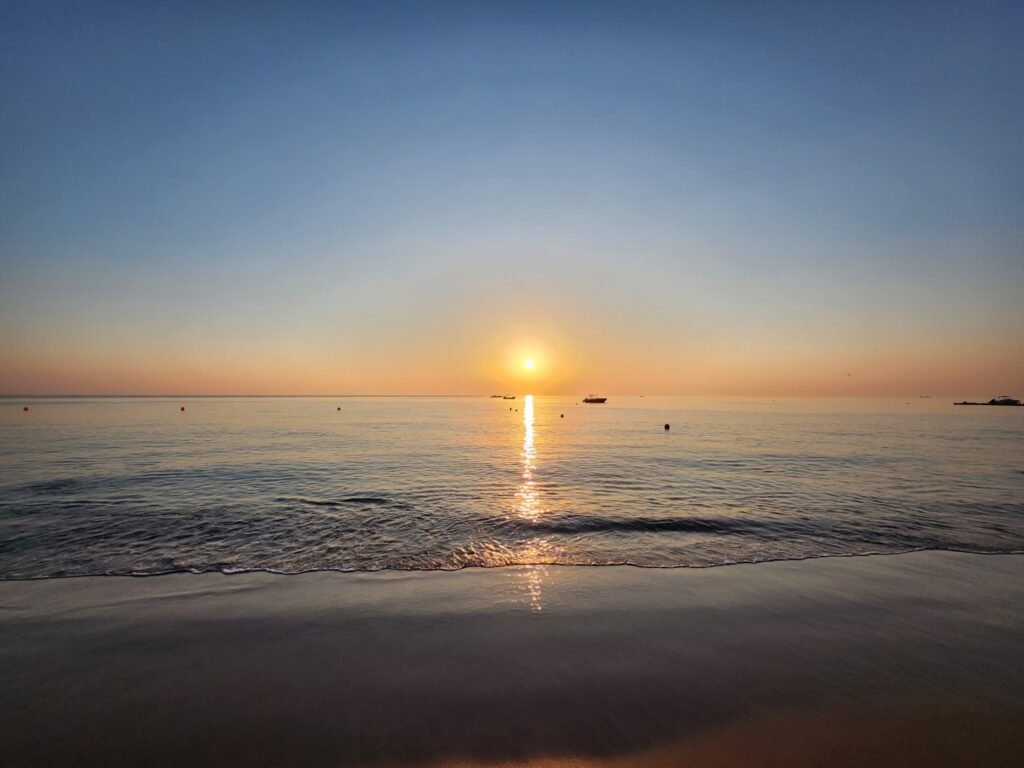 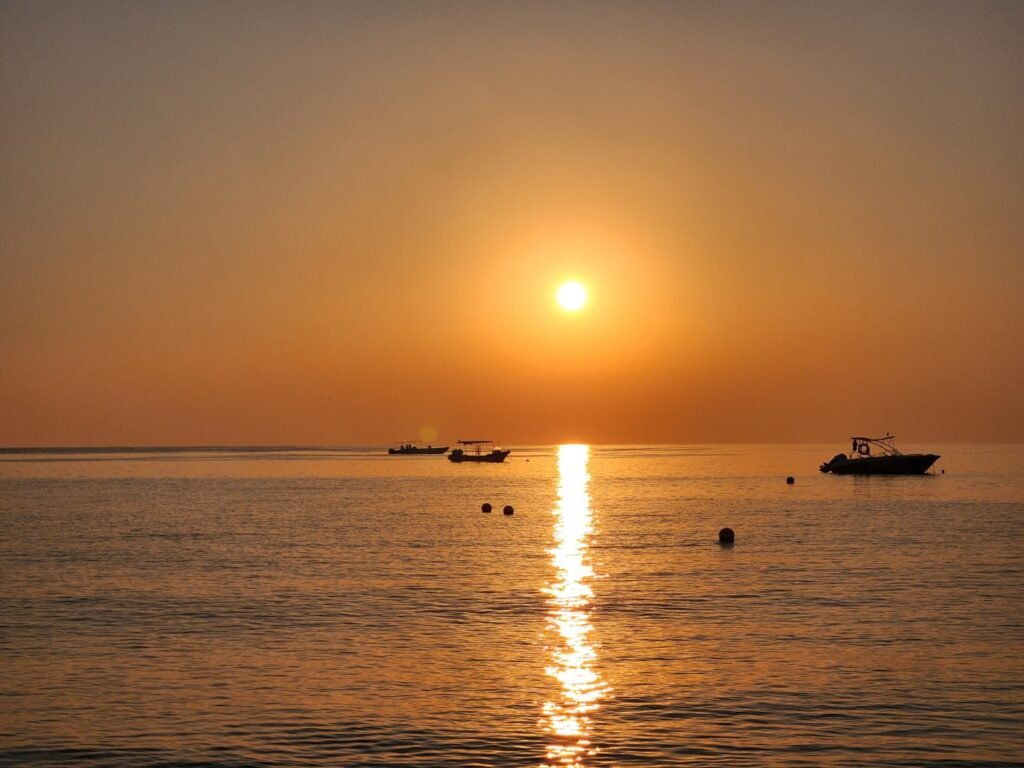 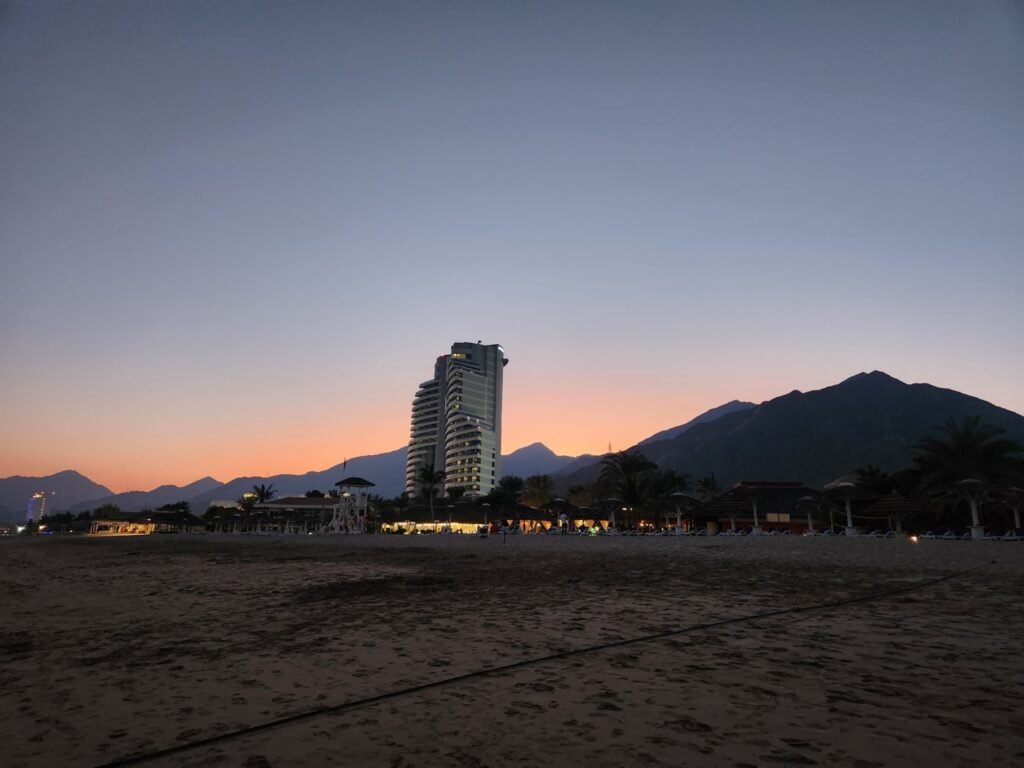 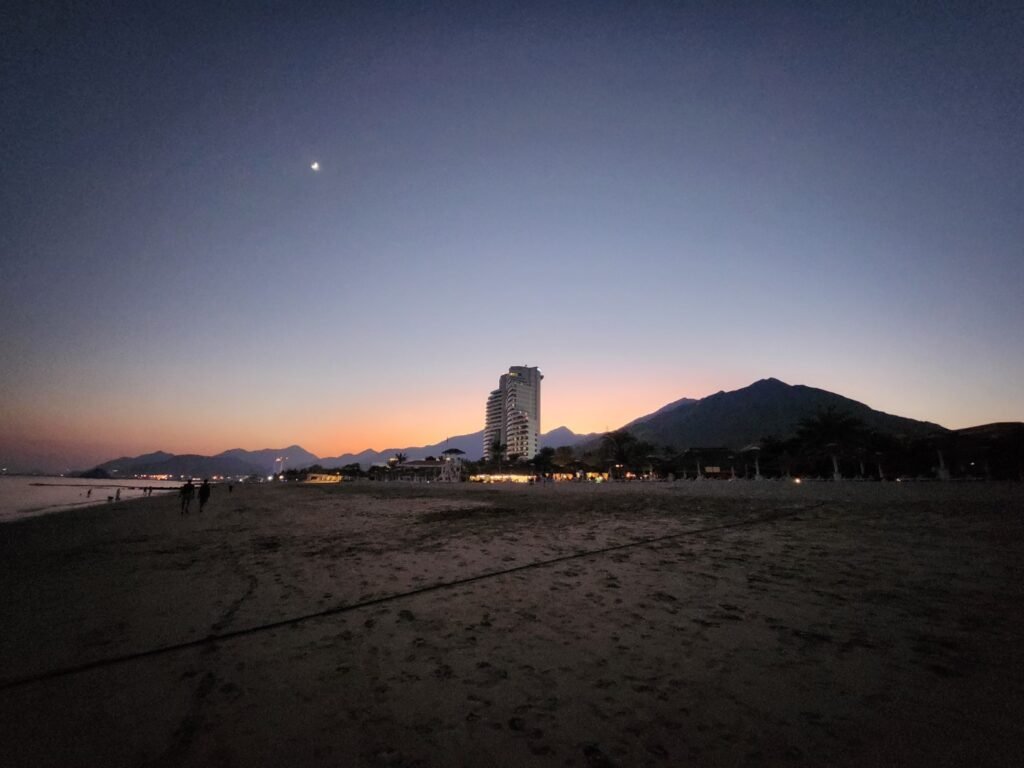 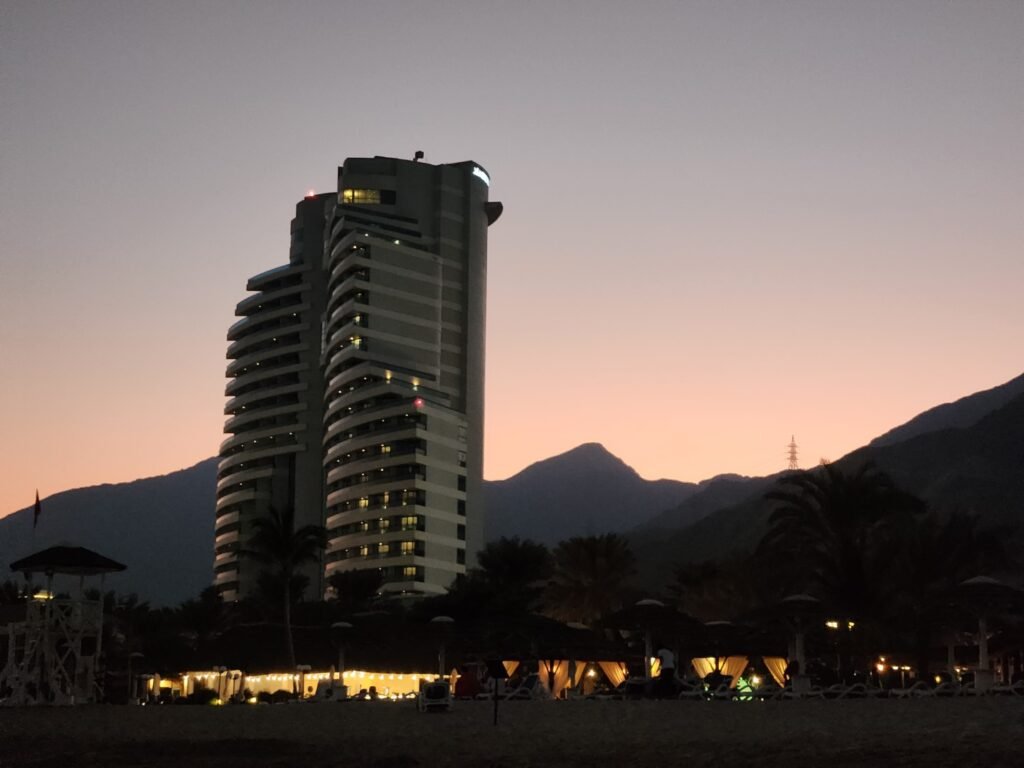 The Galaxy Z Fold4 houses a large Li-Po 4400 mAh battery and the device has support for 25W fast charge with wired cables that can fill 50% of the battery in 30 minutes, along with 15W wireless charging and 4.5W reverse wireless charging if you want to share power between compatible devices. We ran the PC Mark 10 Battery test in the unfolded state and the Fold4 lasted for 10 hours and 43 minutes.

Samsung has indeed improved the design of its latest foldable smartphone and the Fold4 is the best they have created. The cover display is now easier to use, thanks to the reduced size of the hinge, and screen resolution is also better on both the cover and unfolded display. The crease on the main display is also less noticeable as compared to previous models and there is also the Corning Gorilla Glass Victus+ and Armor Aluminum for better durability. 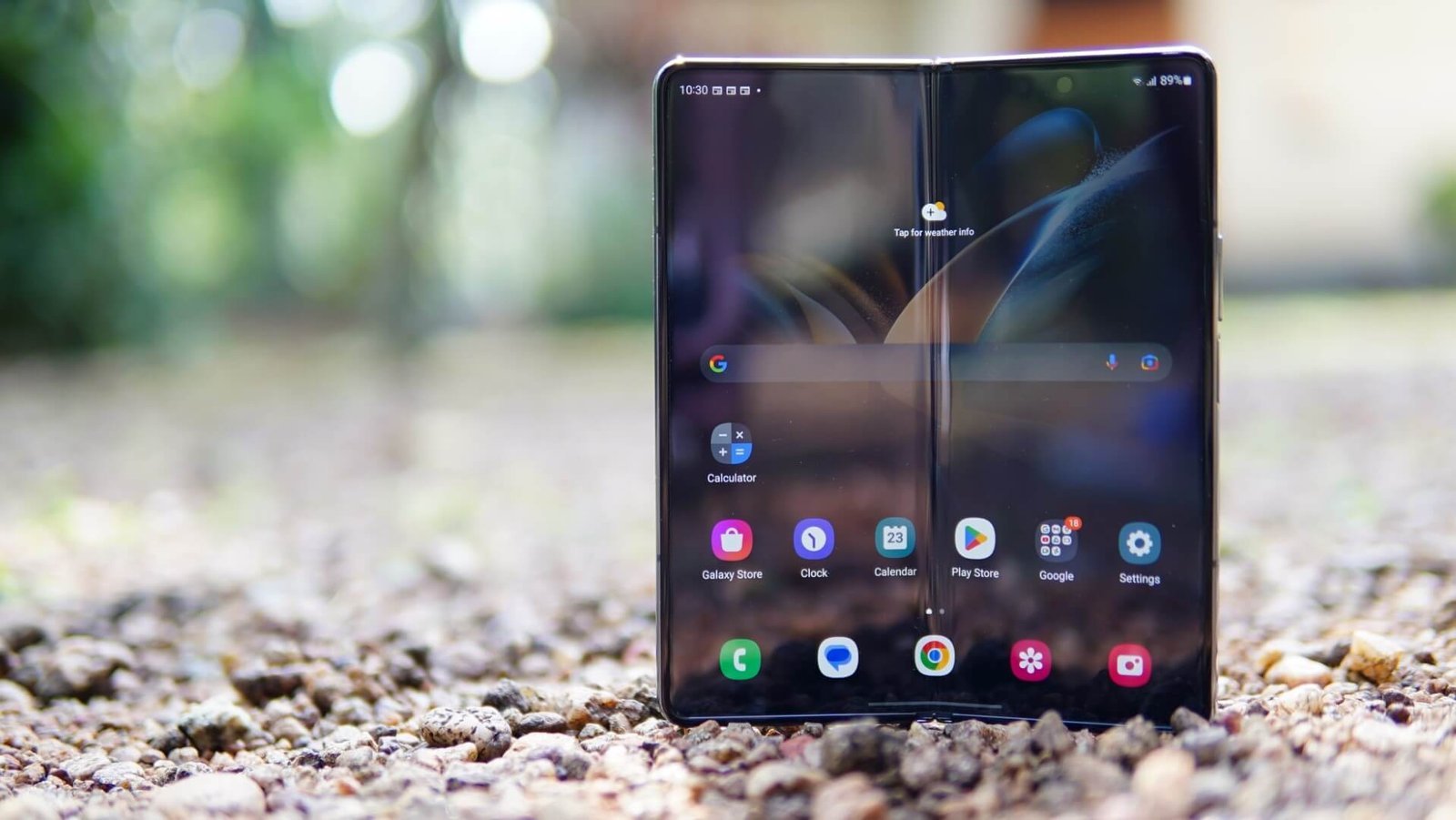 The device is powered by the Snapdragon 8+ Gen 1 SoC with the Adreno 730 GPU and 12GB RAM for high-performance and smooth gameplay, along with the latest Android OS with One UI 5 user interface. The smartphone features three main shooters for wide, ultra-wide, and telephoto shots that produce stellar images and is capable of 8K and 4K videos. The device also houses a 4400 mAh battery that is capable of lasting for about a day, along with support for 25W fast wired charging, 15W wireless charging, and 4.5W reverse wireless charging.

If you want to receive our latest news send directly to your email, please leave your email address bellow. Subscription is free and you can cancel anytime.
Subscribe Us
9.5 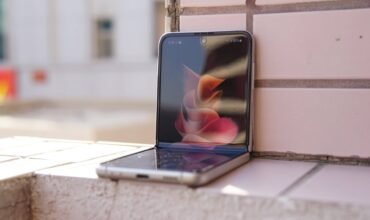 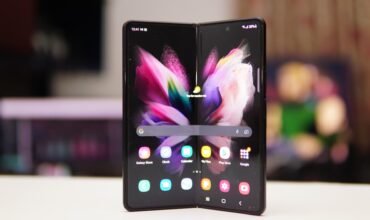 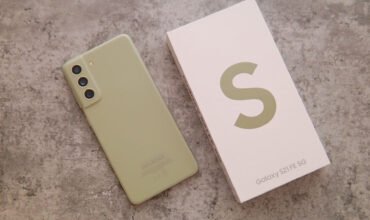